Eskom Holding Limited (Eskom), state-owned power monopoly that produces approximately 95 per cent of electricity used in South Africa, has secured a $3.75 billion loan from the World Bank to set up power plants to increase the country's generation capacity. 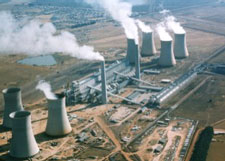 On approving the loan, the Washington-based lender said that the loan, which is the bank's first major lending engagement with South Africa since the fall of apartheid 16 years ago, aims to benefit the poor directly, through jobs created as the economy bounces back from the global financial crisis and through additional power capacity to expand access to electricity.

''Our support to Eskom combines much-needed investments to boost generation capacity for growing small and large businesses, creating jobs, and helping lay the foundations for a clean energy future through investments in solar and wind power,'' he further said.

Johannesburg-based Eskom is Africa's largest power utility accounting for around 45 per cent of the total electricity generation. The utility produces over 44,000 megawatts (MW) of power from its coal-fired, nuclear and hydro-electric power plants.

A major chunk of the $3.75 billion loan under the Eskom Investment Support Project (EISP), amounting $3.05 billion is allocated for completion of the advanced 4800 megawatt (MW) Medupi coal-fired power station in the northern province of Limpopo.