British banking giant Standard Chartered on Tuesday announced plans to axe 17 per cent of its workforce, or around 15,000 jobs, to pare costs by $2.9 billion and also sell or restructure $100 billion of loans – a third of its total - on a risk-adjusted basis. 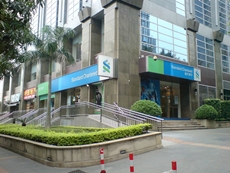 The Asia-focused British bank also said it would raise $5.1 billion by selling new shares as part of an initiative by its new chief executive to restore profitability to a bank hit hard by an economic slowdown in emerging markets.

StanChart announced plans to effect the reduction in workforce and pare bad loans after posting a "disappointing" third-quarter loss as it struggles to return to growth.''

The job reductions, part of a major restructuring that will cost around $3 billion, are proposed to be implemented in phases by 2018, the bank said.

A Standard Chartered spokeswoman refused to give any further details of the job cuts.

More than half of the restructuring costs would come from potential losses on liquidating assets and businesses, the bank said in a statement.

The remaining charges would be from "potential redundancy costs" of a planned headcount reduction of 15,000, as well as goodwill write-downs, it added.

StanChart had reported an unexpected pre-tax quarterly loss of $139 million, compared with a $1.53 billion profit a year earlier.

StanChart would also not pay a final dividend for this year, saving the company $700 million.

StanChart hopes to emerge a stronger and more focused group post restructuring and recapitalisation through a rights issue.

The rights issue, StanChart's first in five years, will be launched on Tuesday at a price of 465 pence per share, a 35-per cent discount to its last traded price in London. Two new shares will be issued for every seven existing shares.

StanChart said Singapore's Temasek, the bank's top shareholder, had indicated it intends to take up its full allocation of the issue, representing 15.8 per cent of the existing share capital.

The capital-raising and asset-restructuring will together push the bank towards a new common equity tier-1 capital (CET-1) ratio goal of 12-13 per cent, according to the company.

The bank's current CET-1 ratio - a measure of financial strength - fell slightly in the third quarter to 11.4 per cent. It will increase to 13.1 per cent after the rights issue.

Shares in the bank plunged as much as 6.2 per cent on the Hong Kong stock exchange in the wake of the results - its stock value has fallen 32 per cent in the past year.