Amidst a surge of protests by farmers in several states, including Maharashtra, Uttar Pradesh and Tamil Nadu, the Reserve Bank of India (RBI) on Wednesday warned against competitive mega farm loan waivers by states. 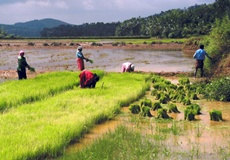 The Monetary Policy Committee (MPC) resolution clearly states that the risks of fiscal slippages has risen with the announcement of large farm loan waivers, RBI governor Urjit Patel said at a media a briefing after the monetary policy review.

The RBI governor said unless there is an existing fiscal space in the state budgets, the states should avoid the "slippery path" of farm loan waivers, he said, adding that it would only erode the fiscal gains made over the previous 2-3 years.

Over a period of time such waivers would start reflecting in the cash bulge, leading to an unexpected spike in inflation, he pointed out.

"Past episodes have shown when there are significant fiscal slippages they do permeate through inflation sooner or later.

"So it's a path we need to tread very carefully before it gets out of hand," Patel pointed out.

Maharashtra and Uttar Pradesh have announced massive loan waiver packages that exceed Rs30,000 crore. In fact, according to a report by Bank of America Merrill Lynch, various state governments are expected to waive off loans worth Rs2,50,000 crore in the run-up to the 2019 Lok Sabha elections.

''Past episodes in our country had shown that when there are significant fiscal slippages, they do permeate to inflation sooner or later. So, it's a path that we need to tread very carefully and before it gets out of hand,'' the governor warned.