The Reserve Bank of India (RBI) today announced an enhancement of daily withdrawal limits from ATMs to Ra10,000 from 4,500.  It also raised the weekly limit for withdrawal from current accounts to Rs100,000 from Rs50,000, following an easing of cash shortage. 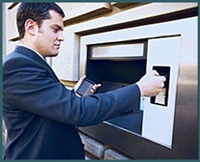 "On a review of limits placed on withdrawals from ATMs and current accounts, it has been decided to enhance the same, with immediate effect as under:

(i) The limit on withdrawals from ATMs has been enhanced from the current limit of Rs4,500 to Rs10,000 per day per card (It will be operative within the existing overall weekly limit). On a weekly basis, there is a limit of Rs24,000 per card.

(ii) The limit on withdrawal from current accounts has been enhanced from the current limit of Rs50,000 per week to Rs1,00,000 per week and it extends to overdraft and cash credit accounts also," the RBI said in a notification.

RBI said there are no changes in the other conditions and that relaxations already provided in its circular dated 28 November 2016 will continue.

The move along with an already easy cash situation will be a big relief to the customers, who had to wait at ATMs and bank cash counters for paltry sums for over a month, after the 8 November demonetisation of Rs500 and Rs1,000 notes.

However, not all ATMs are still dispensing cash and so the cash hoarding by customers continued even after the RBI relaxing the withdrawal limit from 1 January to Rs4,500 per day from Rs2,500 earlier.