Punjab National Bank (PNB), India's fourth-largest state lender by assets, could soon take control of some of the country's most heavily indebted steel companies that owe thousands of crores of rupees to creditors, as part of a debt-restructuring exercise. 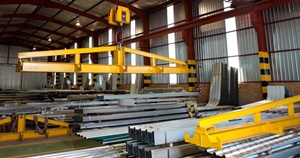 PNB, with around Rs6,000 crore of stressed loans, is awaiting government nod to take control of some of these steel companies and sell them to recover its loans, bank officials said.

The bank has already reported to the Reserve Bank of India (RBI) a list of 400 'willful defaulters', and plans to sell non-performing assets worth up to Rs3,000 crore to asset reconstruction companies in the current fiscal.

PNB has identified 4-5 corporate accounts that are stressed and work is underway for their strategic debt restructuring as per the RBI guidelines, reports said.

The worst affected is its steel loan portfolio. PNB with a steel loan exposure of around Rs25,000 crore, is now finding a quarter of these as stressed.

The bank is considering taking charge of some these companies over in the next two years, changing their management and then selling stakes, reports quoted executive director KV Brahmaji Rao as saying.

PNB is also reported to be in talks with its lending partners about carrying out debt-for-equity swaps, which would dilute the stakes of existing shareholders and give creditors majority ownership, although nothing has been finalized yet.

The bank has so far this quarter undertaken restructuring of Rs676 crores in 22 accounts, which included sectors like power and steel.

Stressed loans have a greater bearing on banks' lending operations than interest rates and this could affect badly-needed financing of infrastructure projects that have greater gestation period.

Banks in India have piled up bad loans of an estimated $49 billion. State-run banks, including State Bank of India (SBI) and other lenders are saddled with stressed loans of about $23 billion to the steel industry, which is struggling with weak prices and surging imports from an oversupplied China.

Debt-laden steel companies, which include Electrosteel Steels Ltd, Bhushan Steel, among other, are in the process of loan-restructuring or awaiting lenders' nod for doing so.