HDFC Bank ATMs to provide on the spot personal loans

HDFC Bank is extending the job of the automated teller machines (ATMs) to include provision of small loans to customers, and in the process automating the process of personal loan approvals as well. 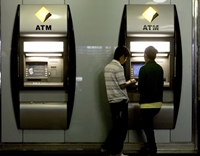 According to a report in The Times of India, the bank has deployed an analytics engine that can take over the task of a credit officer and authorise loans in no time.

The analytics enables the bank to offer what it describes a '10-second' loan for those who log in to the bank's portal. According to the bank, over 12 per cent of its personal loans are dispensed using this route.

The bank now plans to extend this facility to ATMs as well.

HDFC's new ATMs would track customer's history and the credit score provided by credit information bureau, and authorise a loan depending on the credit history.

This will facilitate extending anytime money to anytime loans as well.

These `on-the-spot' personal loans on ATMs will be offered to HDFC's existing customers - the customer will not only be able to see the offer on ATMs but will also be able to get the personal loan in just a few more clicks.

The bank will initially launch the loan-on-ATM product for those with salary accounts and corporate customers.

"A customer can actually withdraw money within a few minutes. For example, HDFC Bank salary account customers can walk across to their HDFC Bank ATMs located within their office premises during lunch hour, apply for a personal loan before having lunch and walk away with money in the wallet," the report quoted Arvind Kapil, senior executive VP and business head (unsecured loans and mortgages) at HDFC Bank, as saying.

According to Kapil, the personal loan segment has huge potential considering that in India consumer loans are only around 10 per cent of the GDP.

"Private banks have only 24 per cent of the market and are growing very rapidly," he added.

At present, a large chunk of consumer lending is with finance companies and public sector banks, accounting for 35 per cent and 40 per cent of all the loans, respectively.