In the wake of a new list revealing names of nearly 1,200 Indian account holders in Swiss banks with illicit money, respected banker and lender Deepak Parekh on Tuesday said that unidentifiable shell companies are being used to pay bribes and ''speed money''; and countering this trend is a ''challenge'' for corporate houses. 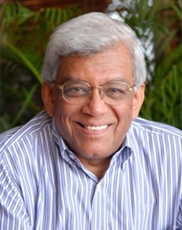 Parekh said everyone agrees that corruption and bribery is rampant, but very few cases get reported or become headline scandals. ''The rest of the cases are simply considered business as usual. This is hardly surprising because bribes paid by corporations have a totally different avatar. They are disguised so well and the payments are made to look completely genuine or go through a large web of unidentifiable shell companies and the movement of funds can be so rapid that the best of forensic accountants find it difficult to trace,'' he said.

Speaking to reporters after a Confederation of Indian Industry (CII) risk summit in Mumbai, the head of mortgage lender HDFC as well as the commercial HDFC Bank also said that the government should distinguish between legitimate and illicit funds before taking action.

"There may be some fraudulent transactions and finance minister Arun Jaitley has said that the government is investigating. We are going to get some penalty and taxes from them,'' Parekh said.

But he added, "They have to be proved first, because we have a system wherein each individual can remit some amount abroad a year. Many people have done that also. So you have to distinguish what is legitimate and what's not."

When asked whether there could be more names to come, Parekh said, "We read media reports. You people say there are crores and crores rupees outside. But, we don't know what the actual number is.

"But I am glad that it has come and people will be more reluctant to transfer money."

An international body of investigative journalists has revealed a list of over one lakh account holders in Swiss branch of global banking major HSBC with funds totalling more than $100 billion.