The US department of justice has asked Deutsche Bank to pay $14 billion (£10.6 billion) to settle an investigation into mortgage-backed securities, the bank has said. 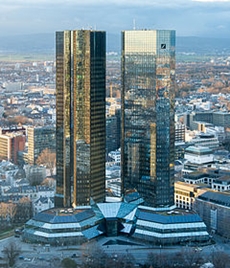 The German bank also on Thursday confirmed that it has started negotiations with the US department of justice to settle the civil rights, which will raise the DoJ possibility of the issue and placement of mortgage-backed securities (RMBS) and related securitisation transactions by the bank between 2005 and 2007.

Deutsche Bank also confirmed that the DoJ has submitted a first compromise proposal of $14 billion and the bank has asked to present the next step a counterproposal.

The bank, however, said it will in no way accept this potential civil claims at a level that even approximately equal to the said number.

''The negotiations are just beginning. The German bank expects a negotiated outcome that is in the range of its competitors, which have already agreed with the US Justice Department to significantly lower amounts,'' it added.

The claim against Deutsche, which is likely to be the subject of negotiations for several months, was much bigger than expected.

Several banks in the US have been subject to various investigations over alleged mortgages to unqualified borrowers and repackaging of those loans as safe investments and selling the risk on to others.

Deutsche Bank is facing one of the largest penalties handed out by US authorities in the aftermath of the financial crisis. The fine also coincides a difficult time for Deutsche Bank, which saw a 20 per cent fall in second quarter revenues and a 67 percent drop in profits.

Goldman Sachs settled charges of irregularities in mortgage-backed lending for $5.1bn in January this year.

The department of justice sought $12 billion from Citigroup in 2014 for the sale of mortgage-backed financial products. The bank ended up paying $7 billion.

Bank of America paid $16.7 bn in the same year to settle similar charges.

In 2013, JP Morgan Chase was fined $13 billion for alleged overstating of the quality of mortgages being sold to investors.

The sale of residential mortgage-backed securities triggered the 2008 financial crisis.