BNP Paribas may face $10-bn fine from US DoJ: report

BNP Paribas, France's biggest bank, was hit by fears on Friday of a huge US fine - big enough to see it raise capital and restrict its dividends - driving the lender's shares sharply lower. 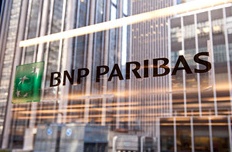 France's largest bank said it was following the case "with the utmost attention" following a report in The Wall Street Journal saying the US justice department wanted $10-billion fine from the bank - double the amount previously reported and over 20 per cent higher than the bank's 2013 pre-tax income.

BNP shares fell sharply as much as 6 per cent to their lowest level in over eight months, slashing almost $5 billion off the bank's stock market value.

The decline saw the loss at 18 per cent since 13 February, when the bank first took a €1.1-billion provision for a potential sanctions fine as part of a total litigation provision of €2.7 billion.

There was also an increase in the cost of its debt insurance.

According to analysts at Citigroup, a $10-billion fine would cut the lender's capital ratio to below 10 per cent - a level seen as key to staying out of the danger zone as the EU carried out "stress tests" of banks' financial health.

The US had been investigating BNP Paribas for years and last month the bank had said it faced a penalty of at least $1.1 billion, without naming a specific sum.

Last week it was reported to be facing a fine of at least $3 billion, but the picture now though looked far gloomier for the bank.

A $10-billion fine would be over five times the biggest amount paid by a bank to settle allegations of US sanctions violations.

The US authorities cracked down hard on foreign banks, many of them from the UK, for making transactions through the US financial system involving parties in Iran, Sudan and other blacklisted countries.

HSBC parted with $1.97 billion in 2012, though that fine also settled allegations of money laundering for Mexican drug cartels. Standard Chartered was next to be fined, with a total of $667 million in fines paid to the justice department and New York's banking regulator, mainly for allowing transactions linked to Iran.

In addition to the huge amount, BNP Paribas could also be hit with a temporary ban on processing dollar transactions, a business that was essential to the operations of an international bank.