Employees of state-run banks across the country will go on a two-day strike from Wednesday, in protest against the nominal two per cent increase in wages offered by the Indian Banks’ Association (IBA) that could affect banking services, including cash dispensation through ATMs. 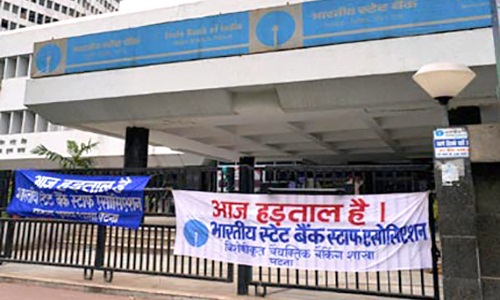 Over a million employees belonging to public and private sector banks are expected to participate in the two-day strike called by the United Forum of Bank Unions (UFBU), an umbrella organisation of nine unions, on 30 and 31 May, D T Franco, general secretary of All India Bank Officers’ Confederation said.
Employees of State Bank of India's main branch in Mumbai's Fort area is also holding a demonstartion today.
During wage negotiations held on 5 May, IBA is said to have proposed to offer a two-per cent increase in wages with effect from 31 March 2017 while maintaining that the negotiations on officers demands would be restricted to scale III officers.
"It is only because of provisions towards NPA that banks have booked losses, and for this, bank employees are not responsible," United Forum of Bank Unions' convener Devidas Tuljapurkar pointed out.
He said in the last two-three years, bank employees have worked tirelessly for implementation of government initiatives such as Jan-Dhan, demonetisation, Mudra and Atal Pension Yojana, among others. "This has resulted into huge increase in their workloads," he said.
In the last wage settlement for the five year period between 1 November 2012 and 31 October 2017, IBA had provided a 15-per cent hike in wages.
The UFBU is an umbrella body of nine unions, including All India Bank Officers' Confederation (AIBOC), All India Bank Employees Association (AIBEA) and National Organisation of Bank Workers (NOBW).
“The volume of business and the volume of work of the employees and officers has gone up enormously in the recent years… In addition, bank employees and officers are compelled to undertake so much of non-banking business and all the burden of doing various government schemes have fallen on the shoulders of the bank staff,” the strike notice issued by UFBU said.
MORE REPORTS