The cash shortage across the country remained unabated for the third day today, with many ATMs across the country running dry, except perhaps in the metro cities. The problem is being blamed mainly on a cut in the supply of Rs2,000 notes along with higher withdrawals on account of elections due in Karnataka and social media reports of cash shortage. 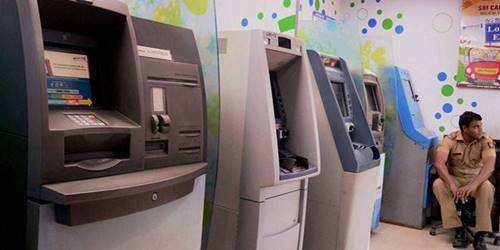 Long queues and ‘no cash’ signboards became common in many parts as depositors queued up to withdraw as much cash as possible in what appeared to be a panic.
Currency is becoming scarce after the Reserve Bank of India is reported to have stopped supplying Rs2,000 notes, leaving most ATMs to operate at less than 50 per cent capacity.
The cash crunch has returned to India for the second time in 18 months. The Narendra Modi government had in November 2016 demonetised Rs500 and Rs1,000 notes, and later introduced Rs2,000 notes to ensure new currency reaches people quickly. That may be ending as the RBI seems to have curtailed or stopped the printing of the large-denomination notes.
It was reported on Tuesday that ATMs are running on empty in many states, including Karnataka, Maharashtra, Andhra Pradesh, Rajasthan, Uttar Pradesh, Madhya Pradesh, Bihar, Gujarat and Telangana. (See: ATMs run dry in many states; Jaitley vows quick response). https://www.domain-b.com/finance/banks/20180417_arun_jaitley.html
According to banks, Telangana, Andhra Pradesh, Karnataka and Bihar are the worst hit as bank branches as well as ATMs have run dry, while Jammu and Kashmir and Chhatisgarh have also reported serious problems. Maharashtra, Goa, Kerala and Rajasthan were better off with not many complaints, though it has become a topic of conversation.
“The Rs2,000 note is not coming back to circulation,” Neeraj Vyas, deputy managing director at the country’s largest bank, State Bank of India, told The Economic Times.
“Whatever Rs2,000 notes we put in the ATM, it goes out. But it doesn’t come back over the counter. So because of the less stock of Rs2,000 notes, the cassettes in ATMs are running dry and that capacity is roughly Rs50 lakh which is now blocked,” he said.
The four cassettes in an ATM can contain roughly Rs65 lakh when full. One cassette filled with Rs2,000, two cassettes with Rs500 and one with Rs100. Bankers say that because of the Rs2,000 shortage, 45 per cent of the ATM capacity is unutilised, The Economic Times reported.
Bankers put the blame on RBI, saying it is not supplying adequate cash despite banks demanding more currency.
“There is a lack of currency supply from RBI,” a banker who did not want to be identified told the paper. “We are requesting every fortnight. The regulator knows our currency position. Cash is coming back but not in the proportion that we want.”
Economic affairs secretary Subhash Garg said the demand for cash is being met. Additional cash is being supplied to meet the demand and notes equivalent to Rs2,500 crore are being printed daily.
Amid the currency shortages in various parts of the country, the government has decided to increase printing of Rs500 notes five-fold, Garg said.
"We have taken steps to increase the supply of currency in case the demand were to go up further," he said, adding, "To give you an example, Rs500 notes - we print about 5 billion of notes per day. We have taken steps to raise this production five times."
An analysis of the data from RBI shows that it has consistently been reducing the supply of currency after pumping in record amounts following demonetisation.
The average amount of currency coming out in circulation right after demonetisation was Rs10,000 crore a day. That subsequently fell to Rs5,000-6,000 crore and in the past few months has fallen to Rs1,500 crore.
According to a Business Standard report, Confederation of ATM Industry (CATMi) spokesperson V Balasubramanian explained that ATM service providers do a daily calculation of the cash required, called indent, which is sent to banks in the night for the following day. He said that until March end, 90 per cent of the daily demand was being met by the banks. However, this has reduced since the first week of April. "Our indent has remained the same since March, but banks have not been able to meet it for the past four-five days," said Balasubramanian.
Former finance minister P Chidambaram tweeted, “As a rule, cash supply must grow at the same rate as the economy is growing. The cash shortage may be because cash supply has been arbitrarily reduced.”
He further said, “A government is obliged to provide as much cash as the people need at any given time. Government or RBI cannot arbitrarily control the supply of cash.
“If RBI has injected sufficient cash, it is obliged to tell the people why there is a cash shortage.”
MORE REPORTS