While the Indian government continues to promote digital transactions in the country, India’s cyber security chief Gulshan Rai himself does not make much use of internet banking. 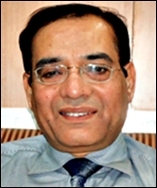 He revealed that he does not trust internet banking and keeps a low balance in his account avoid fraud.
Rai told a conference that there were some “issues there” and that people who use internet banking must know about the security risks.
He said in the conference chaired by consumer affairs minister Ram Vilas Paswan that frauds in ATMs and credit cards are very complex and solving them was difficult.
He added that there were issues like who regulated the digital market place, and who handled consumer complaints.
He added that he keeps Rs25,000 in a separate account and uses the sum if he has to use a debit card.
At a conference held in Delhi on the occasion of World Consumer Rights Day, India’s Cyber Security Chief, Gulsan Rai, said that he hardly does any internet banking himself because he is not sure about how secure it is.
He was quoted in reports saying, “There are issues like who is the regulator of digital marketplace? How do we handle the consumer grievances? Frauds in ATMs and credit cards are very complex and solving them is a bit difficult.”
He said more steps need to be taken to safeguard online consumers as e-transactions are expected to hit $200 billion by 2025.
It has been reported that the government has also expressed concern over the risks in online transactions, and is taking steps to put in place adequate safeguards to keep digital marketplace safe.
According to commentators, with the passing of the Consumer Protection Bill in the Parliament, the government may frame rules to regulate the e-commerce market.
MORE REPORTS