Finance Minister Arun Jaitley has categorically asserted that depositors would be ''fully protected'' in the event of a bank failure, the third clarification the government has made on the issue in less than a week as it seeks to allay mounting concerns about a proposed 'bail-in' clause in a draft legislation on financial resolution. 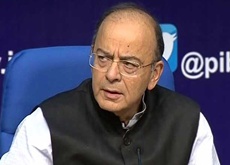 ''The Union Minister for Finance and Corporate Affairs Arun Jaitley said that the Financial Resolution and Deposit Insurance Bill 2017 is before the Joint Committee of Parliament,'' the finance ministry said in a statement on Monday. ''Whatever are the recommendations of the Committee, the government will consider them. But rumours are being spread about the Bill.''

Since the FRDI Bill was tabled in Parliament, it has given worries to the depositors. An online petition was launched on 7 December - ''Do not use innocent depositors' money to bail in mismanaged banks #NoBailIn'' - and had attracted over 103,350 signatures by this morning, according to The Financial Express.

The online petition on change.org, was started by Mumbai-based Shilpa Shree. ''This bill gives power to a government entity to use depositors' money to save a bank on the verge of bankruptcy,'' the petition says.

FJaitley has maintained that this law is must passed as under the present system there is inadequate protection for depositors.

In the backdrop of criticism in the media and on social media about the 'bail-in' clause, which allows for the cancellation or modification of bank deposits to shore up bank finances, the ministry of finance had on 7 December issued a statement saying that the provisions of the FRDI Bill do not hurt depositors' interests.

''Jaitley said the government has already clarified and said it is committed to strengthen the PSU banks and the financial institutions,'' the ministry added in its statement on Monday. ''Removing any misgivings and rebutting false rumours being spread about the provisions of the FRDI Bill 2017, the finance minister said that about Rs2.11 lakh crore is being pumped in to strengthen the public sector banks. So no such question arises (regarding the failure of banks).

''If such a situation arises, the government will fully protect deposits made by the customers. The government is very clear about it,'' Jaitley was cited as saying in the statement.

But even bankers are sceptical. ''If the intent of the government is to protect the deposits fully, then what is the need for the bail-in clause? They should just scrap it,'' Sanjay Bhattacharya, former managing director at the State Bank of India, told The Hindu.

''If the clause is included in the bill, then one of the impacts will be on the price of gold, which will shoot up,'' Bhattacharya added.

Earlier, Jaitley had himself tweeted that the ''objective of the Government is to fully protect the interest of the financial institutions and the depositors.''