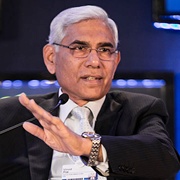 The government is looking at region-based consolidation of public sector banks so that all regions will have enough and balanced financial support system, chairman of the Banks Board Bureau Vinod Rai said.

The government is banking on merger of small banks with bigger banks and amalgamation of weaker banks with stronger ones for consolidating its loss-hit banks and the merger would be done in a way that all regions benefit with the presence of a strong lender the BBB chief said.

"We have to plan a model for consolidation which will be region-based so that we have a few strong banks in the west, north, south and east," Vinod Rai said while speaking at the annual Credit Suisse Asian investment conference in Hong Kong.

Banks in India, mainly state-owned ones, have huge amounts of stressed loans – to the tune of Rs9,64,000 crore ($147.33 billion) as of end-December, Santosh Gangwar, minister of state for finance, had informed parliament this month

Revamping state-owned banks and adding financial strengths to them are fundamental to rebuilding a financial system capable of underwriting credit growth and job-creating investment in Asia's third-largest economy.

Rai said public sector banks are crucial for infrastructure and long-term project lending, sectors which most private banks usually steer clear of long-term lending, adding that there cannot be any reservation for private sector banks.

Rai also said the government does not have the financial capacity to keep raising capital to recapitalise its banks at an increasing pace.

As of now, finance minister Arun Jaitley has earmarked Rs70,000 crore ($10.5 billion) in the budget for capital infusion into state-run banks over a four-year period ending March 2019.

Rai, however, said some of India's public-sector banks are listed, including Bank of Baroda, Bank of India and Canara Bank and the government is thinking that more minority shareholders will invest in such institutions as "these banks are trading at less than their book value"