Banking operations across the country will be hit on Tuesday as a countrywide strike proposed by most unions affiliated to the United Forum of Bank Unions (UFBU) have threatened to go on strike to press for various demands, including accountability of top executives for the mounting bad loans in the banking sector. 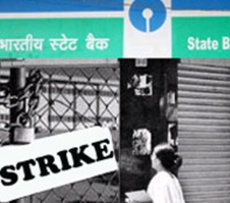 Most of the banks, including SBI, PNB and BoB, have already informed their customers that functioning of branches and offices will be impacted if the strike takes place.

Although private lenders like ICICI Bank, HDFC Bank, Axis Bank and Kotak Mahindra Bank are expected to function, their operations could be affected by delay in cheque clearances.

A conciliation meeting by the chief labour commissioner on 21 February failed to break the logjam as the bank management represented by the Indian Banks Association did not agree to demands and put conditions, reports quoted All India Bank Employees' Association (AIBEA) general secretary C H Venkatachalam as saying.

He said all attempts to find solutions to the demands raised by the unions yielded no results and hence, UFBU decided to proceed with the proposed strike on 28 February.

Some of the demands of the unions include compensation to employees and officers for extra hours of work put in following demonetisation in November and early initiation of process of next wage revision of bank employees.

They have also demanded adequate recruitment in all cadres, stringent measures to recover bad loans and accountability of top executives. Besides, they have pitched for criminal action against willful defaulters.

Unions are opposed to the proposed labour reforms of the government and outsourcing of permanent jobs in the banking sector.

UFBU claims membership of nearly a million employees across banks while the 27 public sector banks account for 75 per cent of the total banking business in the country.