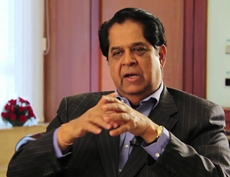 Kamat cited the case of NDB itself, which is planning to get itself rated for bond-raising in many countries, adding that its rating will surely be affected because the promoter countries - Brazil, Russia, India, China, South Africa - are not AAA-rated by any of the Big 3 [Moody's, Standard & Poor's and Fitch].

Speaking at the BRICS Financial Forum, organised by Exim Bank on the sidelines of the BRICS summit in Goa, Kamath wondered why a multilateral bank with deep capital buffer should get a low rating simply because it is promoted by countries whose sovereign ratings are not on the high side as per the parameters used by the rating agencies.

"We need not constrain ourselves from our ability to do business...If this is the norm, I fear growth in the developing world will also be impacted," Kamath said.

Kamath, also wondered why a bank like NDB has to limit its leverage at three times its buffer despite lending to sovereigns, whereas a commercial bank can take take its leverage to nine times despite the higher commercial risks it takes.

"So much money can be raised and can be actually put on the table without having to access further capital if we are able to talk to the rating agencies," Kamath said.

The comments follow concerns expressed by the BRICS (Brazil, Russia, India, China, South Africa) group against the working of the rating market, currently controlled by

The Big 3 - all based in the US - follow policies that fit the interests of US business and they have a stranglehold on the rating market in the absence of a competitor – something of a oligopoly. This has forced the five-member grouping to pursue idea of creating its own independent rating agency.

Exim Bank chairman Yaduvendra Mathur had pointed out earlier that the top three agencies control 90 per cent of the market, and make the issuer pay for the rating rather than the investor, which opens up possiblities for conflicts of interest.

Mathur had also called for an independent rating agency for the BRICS nations, saying the way the present Big 3 are going about their job reeks of conflict of interest.

He also expressed strong concerns on the way these agencies go about rating in the current context. "We look at with dismay that the strong economic growth of India is still not captured in the ratings that we get while we raise the money through overseas bonds," Mathur said.