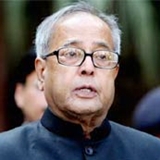 Banks are trustees of the depositors' money and they have a sacred responsibility to protect the money of those who have reposed their trust in them, President Pranab Mukerjee told bankers at a function today.

This, he pointed out, has resulted in a shrinking of resources available for credit disbursement by commercial banks.

The President had a word of praise for the just retired RBI governor Raghuram Rajan's efforts to clean up more than $100 billion of stressed assets on the books of banks.

"Of course more than often you listen to NPAs of banking system, which is no doubt a matter of concern. And governor of RBI who has just retired, Mr Rajan, took many appropriate steps to put the system in the right direction," he said.

He said there is need for credit expansion in a growing economy like India. Overall, the Indian banking sector has done well, especially during the financial crisis, and he would like to congratulate them. However, they must remain prudent about the situation of NPAs.