The government proposes to launch a gold deposit scheme, under which the owner can deposit gold with a bank and earn interest on the deposits, while the bank will lend it onward to jewellers, in a bid to monetise around 20,000 tonnes of idle gold in the country. 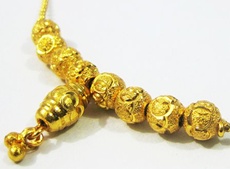 Under the proposed policy, a depositor can open a gold account with a minimum of 30 grams of gold. While banks are free to decide the interest rate, the interest will be exempt from income tax as well as capital gains tax.

India imports gold worth an average $7 billion each month while its peak gold imports go up to as much as 800-1,000 tonnes a year. Such massive gold imports often skew India's trade balance.

On the other hand, temples and household across the country hold on to huge idle stocks of gold.

Finance minister Arun Jaitley in his budget speech earlier this year had announced a scheme to utilise the huge stocks of gold available within the country and launch a sovereign gold bond. "Though stocks of gold in India are estimated to be over 20,000 tonnes, mostly this gold is neither traded nor monetised," he had said at that time.

The move to recycle gold held in households and temple trusts, signals the government's resolve to reduce shipments into the world's top consumer of the metal.

The scheme will benefit the holder, the bank as well as jewelry trade. Gold depositors will earn interest on their gold account, while jewellers can obtain loans on it and banks and other dealers will be able to monetise the gold.

"The amount of interest rate to be given is proposed to be left to the banks to decide. Both principal and interest to be paid to the depositors of gold, will be 'valued' in gold," the draft policy says.

If a customer deposits 100 grams of gold and the bank pays 1 per cent interest, then, on maturity the depositor has a credit of 101 grams of gold.

Banks can also sell the gold in these accounts to generate foreign currency, which can then be loaned to exporters or importers.

Alternatively, banks can convert the gold so mobilized into coins for sale to their customers.

The draft prescribes the process for participating in the scheme. Interested customer need to go to purity testing centres first. There are around 350 Hallmarking Centres spread all over the country which will act as the Purity Testing Centres. These centres will examine the purity, melt the gold and deposit it there itself. At every stage, the person will have to take his/her gold back.

These centres will take up to 5 hours to weigh, melt the gold, verify the purity and issue the certificate against present practice of 90 days. However, the customer will have to pay the charges, if he is taking back the melted gold in the form of gold bars and not depositing it.

In case of deposit, bank will pay the charges. Post deposit, the customer will be issued a certificate.