Banks have opened 1,84,68,000 new saving accounts in over 70,000 camps held across the country under the Pradhan Mantri Jan-Dhan Yojana so far. Banks will hold such camps on a weekly basis, from 8 am to 8 pm on all Saturdays, to achieve the target of covering all unbanked households. 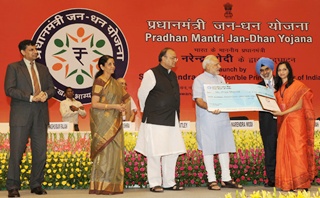 The Pradhan Mantri Jan-Dhan Yojna, an ambitious programme of financial Inclusion covering about 75 million unbanked households in the country. Launching the programme from Vigyan Bhawan on Thursday, Prime Minister Narendra Modi had set a target of achieving the target by 26 January 2015.

Simultaneous launch functions were held in state capitals and districts through 79 mega camps in the presence of union ministers, state chief ministers, MPs / MLAs and other dignitaries. In all more than 70,000 camps were held all over the country and 1,84,68,000 accounts were opened.

It has been decided that henceforth, the bank will hold such camps on a weekly basis, from 8 am to 8 pm on all Saturdays so that the target of covering unbanked households is achieved well in time.

Under the scheme, a person from an unbanked household, opening an account will get a RuPay debit card with a Rs1 lakh accident insurance cover.  For the accounts opened up to 26 January 2015, an additional Rs30,000 life insurance cover was also announced.

The modalities of this additional life cover are being worked out by the department of financial services.

Beneficiaries, who already have a bank account, are also eligible to avail the benefit of accident insurance of Rs1 lakh and life insurance of Rs30,000 under this scheme by getting a RuPay card issued from their bank branch before 26 January 2015.