NPAs by top defaulters like Kingfisher under deep scanner

The top 50 cases of non-performing assets (NPAs) in the banking sector are being closely monitored by both the finance ministry and the banks that have suffered the defaults from the corporate houses like Kingfisher Airlines. 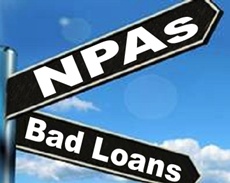 According to a DNA report today, the finance ministry has indicated that in case of evidence of fraud, criminal action will be initiated against such debtors.

Based on the findings of SBI's forensic audit indicating on default in a Rs7,000 crore loan from a consortium of banks led by SBI, the finance ministry says that the company has diverted parts of the loan.

The audit report conducted by external agency E&Y has observed that chances of the airlines having siphoned off the loans for purposes other than the sanctioned use are 'highly positive'.

The finance ministry feels a Rs336 crore loan sanctioned by Union Bank of India (UBI) was withdrawn and deposited in another account with a private bank by Kingfisher, which is against the rules.

The audit report of the state-owned SBI, the country's largest lender, was submitted to the finance ministry two days back.

Kingfisher Airlines tops the list of bad debts in the banking sector, which in total has swelled to Rs2 lakh crore in the last five years.

This particular loan from UBI is not the part of the Rs7,000 crore loan given by the SBI-led consortium to the airline; but the audit report says part of this  loan has also been diverted.

A finance ministry official said, "In a similar fashion, the loans and advances taken from the banks in the SBI consortium has also been diverted, according to the findings of the report. The ministry is closely examining the report and we have already asked SBI to act fast on the NPA issue."

Some of the lending banks to liquor baron Vijay Mallya's failed airline venture such as SBI, IDBI Bank, and United Bank of India are set to declare Kingfisher Airlines as a wilful defaulter. Now the UBI can also take action on the diversion of funds.

"The matters are sub-judice and we cannot comment. We have no communication or knowledge about the alleged diversion of funds, which we stoutly deny," a UB spokesman told DNA.

With bad loans spiralling along with the accumulated interest, the government is now tightening the screws on defaulting companies. "The government has initiated meetings with the banks on the top 50 non-performing assets (NPAs). These will be reviewed at regular intervals as to date we have not got any desired results. ED level monitoring of such accounts by the banks has been ordered by the ministry," said an official.

Armed with the forensic audit report, the SBI is likely to approach the CBI to look into matters pertaining to wilful default and siphoning of funds. CBI has already registered cases against other big defaulters like Rajat Pharma, Deccan Chronicle Holdings Ltd, Century Communications, HTCL Ltd, and Zoom developers Pvt Ltd for 30 alleged wilful defaults.

In all 27 cases against nine companies have been registered. The investigative agency had approached SBI earlier seeking documents on the Kingfisher NPA. The bank had then denied saying it had no grounds to hand over the case then. It was after the CBI intervention that the forensic audit was ordered by the SBI.

In Kingfisher's case, to recover even a good percentage of the Rs7,000 crore is a long shot. The company has few assets since the aircraft it had were all leased and belongs to foreign companies which are trying to get them back. But the aircraft cannot be taken out of India due to cases against the company. Some buildings of the company have been seized and will be auctioned.