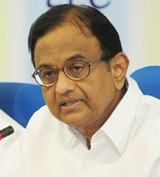 Finance minister P Chidambaram today asked the Reserve Bank of India (RBI) to start issuing new banking licences using its existing powers even as the central bank governor D Subbrao last week made it clear that the government should be ready with the amended Banking Regulation Act before any new bank licences could be issued.

Chidambaram said RBI has the powers to issue new bank licences and expressed the hope that it would take the process forward "appreciating" the government's position.

Reserve Bank governor had, on Friday last week, said the central bank was ready to launch the process of granting new banking licences, but that new entrants in the sector would be allowed only after the Banking Regulation Act was amended. (See: No new banking licences till Act is amended: Subbarao)

Chidambaram had also, last week, urged RBI to start the process of finalising norms and receiving applications of prospective entrants in the banking sector in anticipation of a change in the Act.

''We hope that RBI will pick up the thread and finalise the guidelines and start receiving the applications,'' he had said.