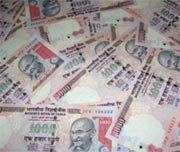 ICICI Bank (together with a wholly-owned subsidiary), Bank of Baroda, Citi and LIC will hold 31 per cent, 30 per cent, 29 per cent and 10 per cent, respectively, of the equity shares in the debt fund.

The IDF would seek to raise debt capital from domestic as well as foreign resources and would invest in infrastructure projects under the public-private partnership model that have completed one year of operation.

Speaking at the launch, finance minister Pranab Mukherjee said the setting up of the IDF through public private partnership would meet the long-term needs of infrastructure sector funding in the country.