Climate change is being felt in a corner of the world different from where one might expect: Wall Street, where some of the biggest investors are starting to take action. 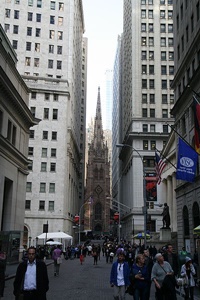 That's the finding of a first-ever survey of institutional investors conducted in part by the McCombs School of Business at The University of Texas at Austin. From banks and insurers to pension and mutual funds, 97% of 439 respondents believe global temperatures are rising. More than half say climate risks are already a factor in their investment decisions, according to "The Importance of Climate Risks for Institutional Investors" published in the March 2020 issue of The Review of Financial Studies.
"These investors have accepted that climate change is happening," said Laura Starks, finance professor at Texas McCombs, who designed the survey with colleagues Philipp Krüger of the University of Geneva and Zacharias Sautner of the Frankfurt School of Finance & Management. "They're trying to come to terms with how it's going to affect the risk and return of their portfolios."
The survey also reveals how institutions are starting to act. Their tactics range from asking companies to catalog carbon emissions to backing shareholder resolutions. If institutions are not satisfied with executives' responses, a few are divesting their shares.
Such measures are only the beginning, the survey suggests. Within five years, fully 91% expect climate risks to be financially material to their investments.
Of executives who filled out the survey, 31% were C-level. Forty-eight percent of the 439 respondents managed more than $100 billion in assets. Institutions' responses paint a mixed picture of how important they consider climate risks. Only 10% rank it as their top concern, compared with standard financial and operating risks. But three kinds of climate risks are rapidly rising in urgency:
The risk of new regulations is already having financial consequences for 55% of respondents.
Within two years, 66% fear physical impacts on their assets from extreme weather, rising sea levels or wildfires.
Within five years, 78% expect technological effects, as greener technologies unseat carbon-burning ones.
"The Paris accord means that different countries are going to have to start regulating carbon emissions more," Starks said. "The industry, as a whole, is just in the early stages of tackling this issue."
How do institutional investors feel they can shield themselves? For many, the first step is to assess the problem. Thirty-eight percent are analyzing the carbon footprints of the securities they own, while 24% consider climate risks when screening new investments.
The next step is to talk with corporate managers. While 43% of institutional investors have discussed climate risks in general, 32% have proposed specific actions to shrink carbon footprints.
Respondents aren't always happy with companies' responses. Thirty percent have submitted shareholder proposals such as a successful 2017 resolution that asked Exxon Mobil to disclose how climate risks would affect the company in the future.
A fifth have taken more drastic steps such as publicly criticizing management, taking legal action, or the ultimate punishment: selling off shares.
But for most, it's enough to put executives on notice. "A company becomes more aware of what's in their carbon footprint, because someone is watching," Starks said.
MORE REPORTS