Solar power companies can recoup their investments within 25 years of operation, SoftBank chief executive Masayoshi Son indicated when he offered free power to India and other member countries of the International Solar Alliance once its solar power projects complete 25 years. 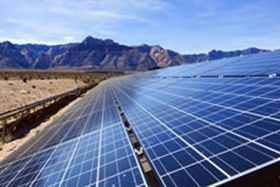 Speaking at the second Re-Invest conference, Son said, “As long as you have the land and sunshine, as long as you have the eyes and ears listening to me, I will give you free power.”
As a ‘special offer’ for International Solar Alliance member countries, Son said, “SoftBank offers free power from solar power projects after a Power Purchase Agreement of 25 years.”
Son said the life of a solar power project can extend to 80 years. “The capacity of the project lowers by 15 per cent in the first five years. But after that, the generation is maintained at 85 per cent of the project capacity for its lifetime,” Son added.
Prime Minister Narendra Modi on Tuesday inaugurated the first assembly of the International Solar Alliance at Vigyan Bhawan in New Delhi, which also marked the inauguration of the second IORA Renewable Energy Ministerial Meeting, and the second Global RE-Invest (Renewable Energy Investors’ Meet and Expo).
The Secretary General of the United Nations, Antonio Guterres, was present on the occasion.
Addressing the gathering, the prime minister said that in the last 150 to 200 years, mankind has depended on fossil fuels for energy needs. He said nature is now indicating that options such as solar, wind and water, offer more sustainable energy solutions.
In future, he said, the International Solar Alliance will be a great forum to work towards ensuring climate justice, adding that at some stage the ISA could replace OPEC as the key global energy supplier.
In this context, the prime minister said India’s EESL will facilitate implementation of 5 lakh solar water pumping systems in ISA member countries.
The first founding meeting of the International Solar Alliance to also expected to witness the signing of 50 projects.
The prime minister said the effects of increased use of renewable energy is now visible in India. He said the country is working towards the goals of the Paris Agreement through an action plan with a target to generate 40 per cent of its total energy requirements by non fossil fuel based sources in 2030,
He said India is developing with a new self-confidence of "Poverty to Power."
The prime minister said that along with power generation, power storage is also important. In this context, he said, the National Energy Storage Mission has been set up to focus on demand creation, indigenous manufacturing, innovation and  energy storage.
He said besides solar and wind power, India is working on biomass, biofuel and bio-energy, adding that efforts are being made to make India's transport system clean fuel based. He said that by converting bio-waste to biofuel, India is converting a challenge into an opportunity.
French President Emmanuel Macron pledged over $850 million for solar projects in emerging economies, as both India and France called for affordable solar technology for emerging nations at the first conference of the International Solar Alliance (ISA) held in New Delhi.
The alliance was co-founded by both countries two years ago on the sidelines of the Paris climate summit to boost the use of solar power, countering the impact of climate change.
Dozens of country leaders, including many from Africa, attended the meeting in the Indian capital and emphasised the need for access to solar technology and concessional financing to address massive energy shortages in many of their sun-drenched nations.
Promising more loans and donations for solar projects by 2022, Macron stressed the need to remove obstacles in scaling up clean energy.
“We only have one planet, and we are sharing it,” he said.
Pointing to African women called “solar mamas” who are trained in India to use solar technology to light up homes and villages, Macron said they had continued their mission, even after "some countries decided just to leave the floor and leave the Paris agreement" — apparently alluding to US President Donald Trump's decision to quit the Paris climate accord.
“Because they decided it was good for them, for their children, their grandchildren. They decided to act and keep acting, and that’s why we are here, in order to act very concretely,” Macron said amid applause.
One hundred and twenty-one countries, situated between the tropics, have signed on to the ISA. Backed by the World Bank and other multilateral agencies, it aims to raise $1 trillion for projects by 2030 for a massive deployment of solar energy.
Rwandan President Paul Kagame, who is chairman of the African Union, pointed out that half the members of the ISA are African countries.
“The sunniest countries in the world should not lack for energy," he said. "The fact that they do is an unacceptable irony.”
The solar alliance initiative is seen as a bid by India to be at the forefront of countries addressing the challenge of climate change — a departure from its stand some years ago that developed economies should cut their emissions more drastically, rather than pressure developing countries.
United Nations environment chief Erik Solheim, who attended the meeting in New Delhi, called the ISA a "milestone" in the fight against climate change and pollution.
MORE REPORTS