A study by a team of scientists, led by professor Valentina Zharkova of Northumbria University, suggests a cooling phase for earth starting in a few years. 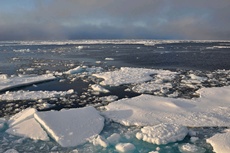 Zharkova and her team base their alarming conclusions on a mathematical model of the sun's magnetic fields.

According to her findings, a ''huge reduction'' in solar activity for 33 years between 2020 and 2053 will see global temperatures drop sharply.

With decreasing solar activity, temperatures are expected to dip to freezing lows not seen since the 1600s – a period known as Maunder Minimum, as per her model.

In the last Maunder Minimum, between 1645 and 1715, temperatures dropped so low as to freeze over the River Thames in London.

According to Zharkova, the next mini ice age will be ''slightly shorter'' but no less brutal.

She explained to Sputnik, ''They keep repeating every 350-400 years because the Sun goes through this [period of] minimum activity.

She added planet earth has natural mechanisms to counter ice ages and has done so ''for billions of years and survived''.

However, she added there is a risk crops ''won't be able to grow properly'', meaning food supplies could be hit across the world.

According to their projections temperatures will start plummeting as early as 2021.

Zharkova and her team of scientists at the university predict the movements of two magnetic waves produced by the sun.

The researchers claim that the rapidly decreasing magnetic waves for three solar cycles starting 2021 for 33 years could set off a mini ice age.

The scientists say in case the cooling were to occur, the mini ice age may be able to reverse the effects of global warming and give humans time to reconsider their habits that are polluting the earth.

''I hope global warming will be overridden by this effect, giving humankind and the Earth 30 years to sort out our pollution,'' Zharkova said.