The US Supreme Court has granted a request by President Donald Trump’s administration to fully enforce a new rule that requires asylum-seekers to first seek safe haven in the country they used in their passage to the United States. 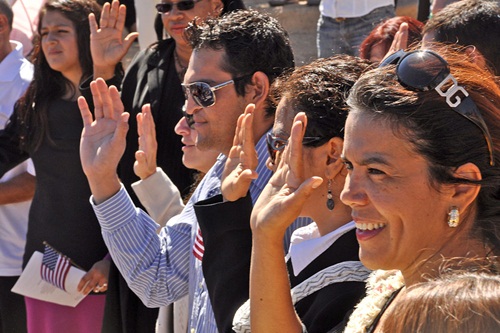 This means that the Trump administration could stop immigrants at the US-Mexico border, pending clarification on the country of origin - a key element of his hardline immigration policy to curtail mass immigration.
Only two of the nine-judge panel of the court - liberal Justices Sonia Sotomayor and Ruth Bader Ginsburg – dissented, as litigation challenging its legality continues.
The Supreme Court ruling comes as a victory to Trump at a time when much of his immigration agenda had been struck down by lower courts. “BIG United States Supreme Court WIN for the Border on Asylum!” Trump tweeted.
The rule, which allows the administration to bar almost all immigrants from applying for asylum, comes as a fresh challenge to the American Civil Liberties Union and others who accused Trump of violating US immigration laws.
The petitioners had challenged US immigration authorities of failing to follow the correct legal process in issuing the rule, which was unveiled on July 15.
For the Trump administration, however, the SC ruling comes as a new tool to crack down on illegal immigration, an election promise for Trump’s 2020 re-election bid.
In her dissenting note, judge Sotomayor said the government’s rule may be in conflict with long-held asylum rules and practices.
“It is especially concerning, moreover, that the rule the government promulgated topples decades of settled asylum practices and affects some of the most vulnerable people in the Western Hemisphere — without affording the public a chance to weigh in.”
It may be noted that California-based US District Judge Jon Tigar had, in July, issued a nationwide injunction blocking the new rule eight days after it became effective.
That allowed to block the Trump rule in the border states of California and Arizona, but a ruling by the 9th Circuit Court allowed the rule to be in effect in Texas and New Mexico.
Tigar ruled to restore the nationwide ban on Monday, but the 9th Circuit scaled it back again on Tuesday night.
The Supreme Court ruling will now allow the restriction on asylum-seekers to remain in place until the underlying legality of the rule is determined at trial.
“This is just a temporary step, and we’re hopeful we’ll prevail at the end of the day,” ACLU attorney Lee Gelernt said. “The lives of thousands of families are at stake.”
The Trump administration issued the rule in an attempt to block hoards of immigrants from countries like El Salvador, Honduras and Guatemala from entering the United States as asylum seekers after crossing through Mexico. The rule would, however, keep asylum protection for Mexican citizens.
MORE REPORTS