Prime Minister Narendra Modi on Thursday highlighted the importance of industrial technology, skill development and multilateral cooperation in creating a better world as he addressed the preliminary session of the BRICS Summit in Johannesburg, South Africa. 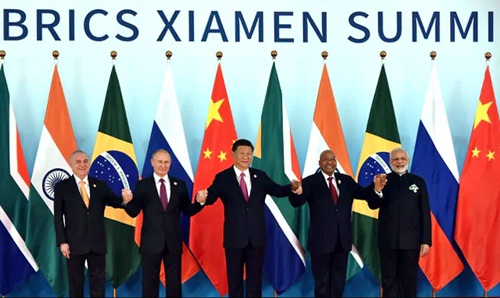 Modi said the new industrial technology and digital interface that the world is building is an opportunity and also a challenge, as he did a balancing act of cooperation and parity with all the other members.
The BRICS summit in Johannesburg will discuss issues which broadly include multilateralism, global governance, health and vaccines, socio-economic empowerment of women, peacekeeping, network of science, parks and technology, inclusive growth, sustainable development and infrastructure. But for the first time, a BRICS leaders' retreat is being organised wherein leaders will deliberate and take stock of BRICS cooperation during the decade and on its future prospects, the ministry of external affairs (MEA) said in its press release.
Modi, on his part, will be seeking new deals for India, while on other he will ensure that the member nations reach a consensus on key issues like trade tariffs and terrorism.
Modi, who arrived here on Wednesday to attend the summit, said technological innovations can help enhance service delivery, productivity levels. New systems and products will open new ways of economic progress, he said.
“At the session with fellow BRICS leaders, I shared my thoughts on various global issues, the importance of technology, skill development and how effective multilateral cooperation creates a better world,” Modi tweeted after his address.
He said India wants to work with BRICS nations on the fourth industrial revolution and called for sharing the best practices and policies in the area. The fourth industrial revolution is the fourth major industrial era since the initial Industrial Revolution of the 18th century. It is characterised by a fusion of technologies that is blurring the lines between the physical, digital and biological spheres.
He said the fourth industrial revolution would have more importance than capital. “High skill but temporary work will be the new face of employment. There will be radical changes in industrial production, design, and manufacturing,” Modi said.
Modi also met Chinese President Xi Jinping to discuss furthering the friendship between India and China. The two are believed to have exchanged views on BRICS cooperation and other issues of mutual interest.
“Furthering India-China friendship. PM @narendramodi and President Xi Jinping hold talks on the sidelines of the BRICS Summit in South Africa,” the PMO tweeted.
The 10th edition of the BRICS Summit takes place in the backdrop of increasing trade tensions that has gripped major trading countries, including the United States, China, Russia and the European Union nations.
Modi, who arrived in Johannesberg at the end of his three-nation Africa tour, will be looking to use this opportunity to further his 'make in India' mission and bring together the member nations on a common ground against terrorism and trade wars.
BRICS is a grouping of five major emerging economies — Brazil, Russia, India, China and South Africa. Originally the first four were grouped as "BRIC", before the induction of South Africa in 2010. The members, this year, are expected to deliberate on issues like international peace and security, global governance and trade wars among others.
The theme of the summit this year is 'BRICS in Africa: collaboration for inclusive growth and shared prosperity in the 4th Industrial Revolution'.
The idea of a BRICS rating agency will also be taken up during this year's summit, said secretary, economic relations in the MEA, TS Tirumurti. India had pressed the BRICS nations to set up an independent rating agency of the five-member group during the first meeting of the BRICS finance ministers and Central bank governors which was held on the sidelines of the IMF / World Bank spring meetings in April 2018.
Speaking at the informal meeting of the BRICS leaders on the sidelines of the G20 Summit in 2017, Modi had also said that expeditious action should be taken to establish the BRICS credit rating agency while asserting that the BRICS group has to be a voice of stability, reform, progress and governance at the world stage.
The summit might also see the five nations hit out against US president Donald Trump's protectionist trade policies as norms on greater financial integration and investment facilitation are discussed, a Business Standard report said.
India and China, however, are on opposite ends of the investment facilitation debate with Beijing actively pushing for a trade facilitation agreement on investments at the WTO and India insisting that such a decision should only be taken with a consensus.
But, at the BRICS finance ministers meeting earlier in 2018, all BRICS nations had agreed to "fight against trade protectionism together".
MORE REPORTS