Hundreds of thousands across US march against Trump's 'zero tolerance'

Hundreds of thousands of people, including Indian Americans, took to the streets in US cities and smaller towns on Saturday to protest against the controversial immigration policies of President Donald Trump, which have resulted in the separation of illegal immigrants and their children. 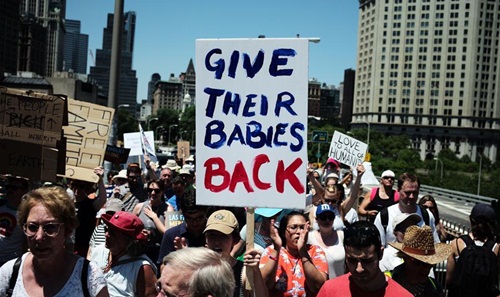 The “zero tolerance” policy of separating immigrant parents and their children on the US border has resulted in the separation of nearly 2,000 children from their parents and guardians.
In major cities and tiny towns, hundreds of thousands of marchers gathered on Saturday across America, moved by accounts of children separated from their parents at the US-Mexico border, in the latest act of mass resistance against President Donald Trump's immigration policies.
Protesters flocked to more than 700 marches, from immigrant-friendly cities like New York and Los Angeles to conservative Appalachia and Wyoming. In Washington, hundreds of people braved scorching sun at a park near the White House.
The protesters, mostly led by Democratic Party leaders and rights activists, demanded that Trump’s immigration policies be humane and under no circumstances separate kids from their parents who cross the border illegally.
Trump, however, insisted that there should be zero tolerance for those crossing the border illegally and they need to be deported.
“When people come into our Country illegally, we must IMMEDIATELY escort them back out without going through years of legal manoeuvring. Our laws are the dumbest anywhere in the world,” Trump tweeted as large number of people came out on streets and in public places including outside the White House against his immigration policies.
“Republicans want Strong Borders and no Crime. Dems want Open Borders and are weak on Crime!” said the US president.
“We’re here to say to Trump: End this zero-tolerance policy,” Indian American Congresswoman Pramila said at the Washington rally organised by a coalition of organisations formed American Civil Liberties Union (ACLU), Leadership Conference on Civil and Human Rights, National Domestic Workers Alliance and Move On.
So far more than 2,300 children have been separated from their parents after being arrested by the US law enforcement agencies as they illegally crossed the border.
In Portland, Oregon, police ordered participants in a march by Patriot Prayer to disperse after officers saw assaults and projectiles being thrown. Some arrests were made. The problems occurred as two opposing protest groups — Patriot Prayer and antifa — took to the streets.
People in the crowd were lighting firecrackers and smoke bombs and police used flash bangs to disperse the clashing protesters.
In Washington DC an estimated 30,000 marchers gathered in Lafayette Park across from the White House in what was probably the largest protest of the day, stretching for hours under a searing sun. Firefighters at one point misted the crowd to help people cool off.
The protesters were joined by a number of celebrities, including Grammy award-winning singer and songwriter Alicia Keys, Diane Guerrero, a star on Netflix’s ‘Orange is the New Black,’ and ‘Hamilton’ creator Lin-Manuel Miranda.
In Atlanta, the legendary civil rights leaders and Congressman John Lewis (78), slammed Trump for his immigration policies. “There is no such thing as an illegal human being. We are all humans,” he said.
The Democratic National Committee chairman Tom Perez told the CNN that this is a moral crisis for the nation. “We’re fighting for our democracy. This is one of those where were ya’ moments,” he said.
“Today, people are coming together all across the country to say that we can’t be locking up children and separating families,” Senator Mazie Hirono said.
MORE REPORTS