Malaysia’s newly elected Prime Minister Mahathir Mohamad said on Saturday he had stopped his predecessor Najib Razak from leaving the country, and sacked the attorney general who had cleared him of involvement in a multi-billion-dollar scandal 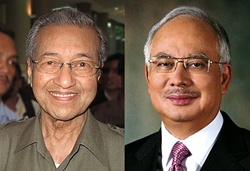 Combined caption: Malaysia's Prime Minister Mahathir Mohamad (left) and predecessor Najib Razak
“It is true that I prevented Najib from leaving the country … as far as I know, he and his wife (were prevented from leaving). I’m not aware of other people,” Mahathir told reporters at a news conference.
Immigration authorities issued an overseas travel ban on Najib and his wife amid reports that the government was reopening investigations into a multi-billion-dollar graft scandal at a state fund 1Malaysia Development Berhad (1MDB).
The order by immigration authorities came minutes after Najib announced in a Facebook post that he and his wife, Rosmah Mansor, were taking a week-long holiday overseas to rest after his thumping defeat in Wednesday's general election.
"The Malaysian Immigration Department would like to confirm that Najib Razak and Rosmah Mansor have just been blacklisted from leaving the country," the agency said on its official Facebook page. It gave no reason.
Moments later, Najib said in a Twitter message that he would respect the decision and would remain in the country.
Questions about Najib's whereabouts were answered when he appeared at a meeting of his United Malays National Organisation (UMNO) to announce that he was stepping down as the party's president and as chairman of the Barisan Nasional, the alliance dominated by UMNO that has ruled Malaysia for six decades.
"We all feel sad about what happened but as a party that upholds democratic principles, we accept the people's decision," he said, adding that his former deputy Ahmad Zahid Hamidi would take over as head of UMNO.
Mahathir also said he had replaced the country’s attorney general, who had cleared Najib of all wrongdoing in the 1MDB scandal. “We have placed a number of restrictions on certain people who have been involved in wrongdoing or making wrong decisions,” he said. “So at the moment we no longer have an attorney-general.” He also said he had instructed that a 1MDB report that was classified as an official secret during Najib’s term be released.
A former prime minister for 22 years, Mahathir returned to politics after a feud with Najib over the 1MDB scandal, and teamed up with an opposition alliance including former foe Anwar Ibrahim. Anwar, 70 is serving a five-year sentence for sodomy, a charge he and his supporters say was politically motivated.
Mahathir has said the king has indicated to him that a royal pardon for Anwar would be announced soon.
Two sources told Reuters on Friday that new Prime Minister Mahathir Mohamad planned to reopen investigations into a graft scandal at state fund 1Malaysia Development Berhad (1MDB) that has plagued Najib since 2015.
Mahathir would appoint a finance ministry adviser to "restart the 1MDB probe and bring back the money", said one source, who worked closely with his campaign team. The second source, a lawmaker, said the announcement could be made on Saturday when Mahathir names members of his new cabinet.
Najib, 64, lost this week's general election to an alliance headed by Mahathir, his mentor-turned-rival, at least partly because of popular disgust over the 1MDB scandal.
Mahathir, who was the country's premier for 22 years and was sworn in again as prime minister on Thursday, said he would not be looking for a scapegoat in the scandal. "What we want is to restore the rule of law ... if the law says that Najib has done something wrong, then he will have to face the consequences," he said.
News broke in 2015 that about $700 million allegedly stolen from 1MDB had made its way into Najib's personal bank accounts.
He denied any wrongdoing and was cleared by Malaysia's attorney-general, even as US authorities alleged that over $4.5 billion was stolen from the fund in a fraud orchestrated by a financier known to be close to Najib and his family.
US Attorney-General Jeff Sessions called the 1MDB scandal "kleptocracy at its worst" and the fund is the subject of money-laundering investigations in at least six countries, including Switzerland, Singapore and the United States.
Filings by the US Justice Department in a civil lawsuit indicated nearly $30 million of the money stolen was used to buy jewellery for Rosmah, including a rare 22-carat pink diamond set in a necklace.
In a Twitter message on Friday, Najib said he was praying that, "after this divisive period", Malaysia would unite.
MORE REPORTS