Fragmentation in global financial regulation costs more than $780 billion annually, according to a survey released today by IFAC (International Federation of Accountants) and Business at OECD (BIAC).

The survey, Regulatory Divergence: Costs, Risks, Impacts: An International Financial Sector Study, examines the cost of regulatory divergence by taking the pulse of more than 250 regulatory and compliance leaders from major global financial institutions. The results quantify the massive impact of fragmented regulation: material economic costs, financial system risk, and barriers to economic growth.
Regulatory divergence, which refers to inconsistencies in regulation between different jurisdictions, costs financial institutions between 5 per cfent to 10 per cent of annual revenue turnover, according to the survey findings.
Over half (51  per cent) of respondents said resources have been directed away from risk management due to the costs associated with diverging regulation.
The $780-billion price tag is conservatively inferred by the findings, with smaller institutions (annual turnover less than $100 million) twice as likely as their larger counterparts to experience very material costs.
“There is clear evidence that reforms implemented since the last financial crisis have resulted in fragmentation that consumes valuable resources, including those that could otherwise be focused on de-escalating the risk of the next crisis,” said Fayezul Choudhury, CEO of IFAC. “In particular, the competitive disadvantage for small and medium sized institutions should serve as a wakeup call for policy makers.”
The costs of regulatory divergence are felt most strongly in the capital markets sector, with 92 per cent of respondents indicating material or very material costs, followed by banking (76  per cent) and professional services (66 per cent ).
“The impact of fragmented regulation on growth is troubling, as non-tariff barriers to trade and investment stop businesses from expanding internationally, which undermines job and wealth creation,” said Bernhard Welschke, secretary general, Business at OECD (BIAC).
“The survey highlights the need for increased international regulatory co-operation to reduce the regulatory divergences which are costly on business. Pioneering OECD work in this area helps countries improve the way they cooperate on regulatory matters across borders to achieve their public policy objectives and reduce unnecessary costs for business and citizens,” said Marcos Bonturi, director for public governance, Organisation for Economic Co-Operation and Development (OECD).
Business at OECD (BIAC) and IFAC recommend enhancing international cooperation among regulators, increasing overall alignment in regulation, and ensuring transparency in international rule-setting to mend the fractures caused by regulatory fragmentation. 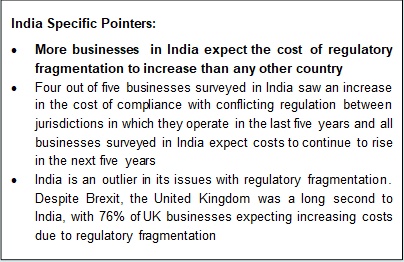