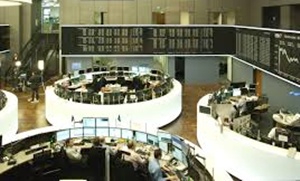 The firm, founded in 2000 by Carlo Koelzer, is credited with helping launch a new generation of forex platforms that allowed European companies to pick banks of their choice for currency trading.  It has registered double-digit annual revenue growth since its inception.

360T has a global presence with customers in more than 90 countries and offices in Europe, America, Asia-Pacific, India and the Middle East.

The combination of Deutsche Boerse and 360T is expected to yield tens of millions of euro in synergies in the mid-term, in addition to propelling 360T's organic growth, Deutsche Boerse said in a statement yesterday.

Deutsche Boerse plans to fund the acquisition through a combination of debt and equity, aiming to minimise a potential impact on its credit rating.

The transaction is expected to be immediately accretive to Deutsche Boerse's earnings. Including synergies, the acquisition will meet customary targets for return on the investment, Deutsche Boerse said.

Deutsche Boerse has not indicated a date for completion of the transaction, but stated that it will be subject to approvals by competition and supervisory authorities.

Frankfurt-based Deutsche Boerse is a major European equity and derivatives trading platform with presence in Europe, the US, and Asia. In addition to the FSE, its subsidiaries include clearing house Clearstream, electronic securities trading system Xetra, derivatives exchange Eurex, and also Stoxx, a joint venture with Switzerland's Six Group.

Deutsche Boerse's persisting endeavour to merge with NYSE-Euronext to create the world's largest stock exchange was turned down in 2012 by the European antitrust authorities on the grounds that the merged entity would become a near monopoly. Four months ago, the EU also rejected an appeal against the blocked merger.

The 360T acquisition is the largest by Deutsche Boerse, since its 2007 purchase of US derivatives exchange ISE for $2.8 billion and the first major deal by its new chief executive Carsten Kengeter who took the reins on 1 June.

According to media reports, several other exchange operators were interested in acquiring 360T and in the final round, Deutsche Boerse emerged the winner outbidding US options and futures major CME Group Inc.