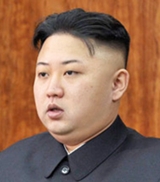 North Korean leader Kim Jong Un has called upon the nation to embark on "an all-out struggle" to revamp its impoverished economy and to ''remove confrontation'' on the divided peninsula.

In his televised New Year's address broadcast by state media, Kim urged the nation to embark on revamping the nation's poverty-stricken economy on the same spirit that saw North Korea launch a long-range rocket last month.

"Let us bring about a radical turn in the building of an economic giant with the same spirit and mettle as were displayed in conquering space," Kim said, stressing the need to improve the standard of living of the country's malnourished population.

He, however, did not provide details as to what specific measures would be taken to improve the lot of the people.

On the country's relations with South Korea, Kim said removing "confrontation" between the two sides would be key to bringing about their reunification. He also criticized the "hostile policy" of "anti-reunification forces" in the South.