Prime Minister Narendra Modi and Russian President Vladimir Putin are reported to have discussed the construction of a north-south transport corridor at an informal summit in Sochi, Russia today. 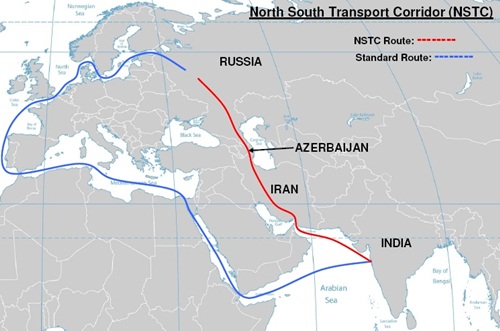 The International North-South Transport Corridor is a 7,200-km-long multi-modal network of ship, rail, and road route for moving freight among India, Iran, Afghanistan, Armenia, Azerbaijan, Russia, Central Asia and Europe.
But the current INSTC project was initiated by Russia, India and Iran in September 2000 in St. Petersburg.
Addressing the media on the sidelines of the summit, Modi said the two also discussed issues like BRICS and the Shanghai Cooperation Organsation(SCO).
Modi also thanked Putin for Russia’s push to get India permanent membership in the SCO.
Modi’s two-day Russia summit comes days after he held talks with Chinese President Xi Jinping.
India and Russia have a framework for cooperation and institutionalised dialogue mechanisms laid down to ensure their strategic partnership functions smoothly.
Modi thanked Russia for playing a major role in helping India get a permanent membership in the Shanghai Cooperation Organisation (SCO) – an eight-nation bloc which aims at military and economic cooperation between the member states. India and Pakistan were admitted last year into the organisation.
"We are working together on International North-South Transport Corridor (INSTC) and BRICS," ANI quoted PM Modi as saying.
Welcoming Prime Minister Modi to Sochi, Putin said his visit would give a fresh impetus to bilateral ties.
He said Russia and India have been cooperating on several fronts in the multilateral and the international fora. He also mentioned military-to-military cooperation between the two countries.
In his opening remarks, PM Modi said India and Russia have been friends for a long time and thanked President Putin for inviting him for the first-ever informal meeting at Sochi.
Modi recalled his first visit to Russia with then Prime Minister Atal Bihari Vajpayee in 2001 and said Putin was the first world leader whom he met after becoming the chief minister of Gujarat.
He said the seeds of the 'strategic partnership' sown by then Prime Minister Vajpayee and President Putin has now grown into a "special privileged strategic partnership" between the two countries.
The Prime Minister and Russian President Vladimir Putin began their informal summit, a live telecast event, in Sochi.
The Sochi summit is also important under the current international political scenario of extreme polarisation of forces amidst rising  East-West tensions. India is also looking to revive a flagging bilateral relationship through informal meetings.
The two leaders are expected to discuss steps to cement an already solid partnership over several meetings in the course of the day.
In a series of tweets first in Russian and then in English on the eve of his visit to Russia, PM Modi said, “I am confident the talks with President Putin will further strengthen the Special and Privileged Strategic Partnership between India and Russia.”
PM Narendra Modi and Russian President Vladimir Putin will primarily focus on pressing global and regional issues, including impact of the US withdrawal from the Iran nuclear deal, situation in Afghanistan and Syria, threat of terrorism, and matters relating to the upcoming Shanghai Cooperation Organisation (SCO) and BRICS summits during their informal summit in Sochi on Monday, 21 May.
MORE REPORTS