The government of India has decided to withdraw all five hundred and one thousand rupee notes from circulation, extending the fight against black money to counterfeit currencies as well, in a bid to end money laundering, rampant use of counterfeit notes and terror funding. 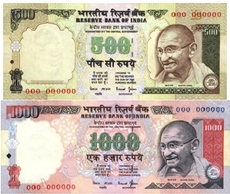 Announcing the decision in a televised address to the nation on Tuesday night, Prime Minister Narendra Modi said banknotes of Rs500 and Rs1,000 denominations will no longer be legal tender from midnight.

The decision follows recommendations of the RBI to issue new Rs2,000 notes and new notes of Rs500 denomination, which will be placed in circulation.

RBI in a notice issued late on Tuesday said the government has withdrawn the legal tender status of banknotes of Rs500 and Rs1,000 denominations of the Mahatma Gandhi series issued by the RBI till 8 November 2016.

This is necessary to tackle counterfeiting Indian banknotes, to effectively nullify black money hoarded in cash and curb funding of terrorism with fake notes, RBI said.

Starting from 10 November 2016, thje public at large, corporates, business firms, societies, trusts, etc, holding these notes can tender them at any office of the Reserve Bank or any bank branch and obtain value thereof by crediting into their respective bank accounts, it added.

For immediate cash needs, these notes of a value up to Rs4,000 per person can be exchanged for cash over the counter of bank branches. RBI has advised public to present a valid proof of identity for availing this exchange facility.

Value credited to the bank accounts can be freely used by issuing cheques or by remitting through various electronic modes of transfer like NEFT, RTGS, IMPS, mobile banking, internet banking etc.

Cash withdrawals from bank accounts and over the bank counters, will be restricted to a limited amount of Rs10,000 per week.

All ATMs and other cash machines will remain shut on 9 November 2016 to facilitate recalibration. When ready, they will be reactivated and cash withdrawals from ATM and other machines will be restricted to Rs2,000 per day, RBI said.

In his televised address to the nation in the evening, Prime Minister Modi said these decisions will fully protect the interests of honest and hard-working citizens of India and that those Rs500 and Rs1,000 notes hoarded by anti-national and anti-social elements will become worthless pieces of paper.

The prime minister said the steps taken by the government would strengthen the hands of the common citizens in the fight against corruption, black money and counterfeit notes, adding that the government is fully sensitive to some of the difficulties ordinary citizens may face in the coming days.

The Prime Minister also announced that those holding old notes of Rs500 and Rs1,000 can deposit these notes in banks or post offices from 10 November onwards till 30 December.

There will be no restriction on any kind of non-cash payments by cheques, demand drafts, debit or credit cards and electronic fund transfer, he said.

There will be some limits placed on the withdrawals from ATMs and banks for the very short period, Modi added.

In his address, the prime minister shared the insight into how the magnitude of cash in circulation is linked to inflation and how the inflation situation worsens due to the cash deployed through corruption.

He said this adversely affects the poor and the neo-middle class. The PM cited the example of the problems being faced by the honest citizens while buying houses.