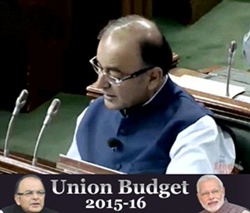 Finance minister Arun Jaitley, presenting the union budget for 2015-16 in parliament, announced that he had abolished wealth tax on the super-rich with an income of Rs1 crore or more per year, and replaced it with a surcharge of 2 per cent.

He also proposed to cut corporate tax from 30 per cent to 25 per cent over next the next four years.

The BSE Sensex and the NSE's Nifty, sensitive to every announcement, rose nearly 1 per cent, recovering from earlier falls after the proposal to cut the corporate tax rate.

He also delayed the implementation of the planned General Anti-Avoidance Rules (GAAR) by two years, in a move clearly aimed at assuring foreign investors.

Jaitley presented a budget aimed at high growth, saying the pace of cutting the fiscal deficit would slow down as he seeks to boost investment and ensure that ordinary people benefit.

Jaitley, delivering his first full-year budget since Prime Minister Narendra Modi's landslide election victory last May, said growth would accelerate to between 8-8.5 per cent in the fiscal year starting in April.

"India is about to take off," Jaitley, 62, said early in his speech to lawmakers. "The world is predicting that this is India's chance to fly."

Jaitley said he would stand by the fiscal deficit target of 4.1 per cent of gross domestic product for the 2014-15 fiscal year ending 31 March.

But he pushed back by a year his medium-term goal of cutting the deficit to 3 per cent of gross domestic product. In 2015-16 the deficit will be 3.9 per cent of GDP, up from the 3.6 per cent target inherited from the last government.

Jaitley said it was time for a "quantum leap" on reforms and that incremental change "is not going to take us anywhere", building on expectations that the budget would deliver big-bang reforms.

The minister said the government would seek to boost the efficiency of the MNREGA scheme. ''Rs34,699 crore is allocated for MNREGA scheme,'' he said.

Jaitley earlier said the state of the country's economy was better today, with its credibility re-established by a series of measures taken by his government.

"I am presenting the union budget in an economic environment which is far more positive than in the recent past. While major economies of the world face difficulties, India is poised for higher growth trajectory," Jaitley said as he started his budget speech in the Lok Sabha.

"The real GDP growth is estimated at 7.5 per cent for this fiscal, making India the fastest-growing large economy of the world," said Jaitley, watched keenly by Prime Minister Narendra Modi, seated next to him.

"We inherited a sentiment of doom and gloom and have come a long way by proper actions," said the finance minister, adding, "Our objective is to improve the quality of life and to pass benefits to common man."

He also said a double-digit growth was now feasible. "Our objective is to conquer inflation. It will be only 5 per cent by end of year."