The Perils of `Indian' Democracy

Like the socialist state withering away at its extreme, the liberals think that extreme liberalism would also help drive the state into anarchy! 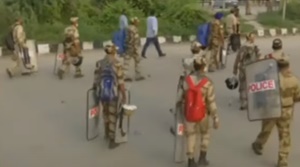 Democracy, it is said, represents the will of the people, reflected through majority voting. It does not, however, provide for a subversion process to undo the majority will. But the so-called ‘liberal democracy’ has added a new feature of destabilising elected governments using media propaganda and supporting opponents of the government, including anti-nationals.
Liberal democracy pours in various ways – human rights being the first stream – media propaganda about cultural attacks on religious groups, races and social castes and classes, allegations of fraud and so on as its protagonists think suitable for meeting their ends.
These liberals also consider it their right to decide what is good or bad for the Indian people, assigning to themselves the right to oppose laws of the land and government decisions.
The spokespersons and supporting structures of the so-called `liberal democracy’ are driving too hard and spending liberally to make India as liberal as possible so that Indians can walk free, speak their minds out, do whatever they think, call anyone names they prefer, use the internet and the so-called social media to malign cultures and people and justify anti-national activities.
The many privileges of the Indian state model include the right to oppose any move or decision – good or bad - by the government and the ruling party, destabilise the government at any cost (including with support from anti-nationals and enemy nations) and even do research on how to destabilise a lawfully elected government.
The liberals also have their supporting messiahs who come in various `avtars’, like Rakesh Tikait, Prasant Kishore, Mamata Banerjee or the Gupkar Gang!
The opposition parties in the country are now queuing up behind the so-called poll strategist, Prashant Kishore, who has been hip-hopping from the Bhartiya Janatha Party to Mamata Banerji’s Trinamool Congress and is now available to any party with the right financial strength.
Currently, however, Prashant Kishor’s Indian Political Action Committee (I-PAC) is in Tripura doing, what the poll strategist says, groundwork for Trinamool Congress (TMC) for the state assembly elections that will become due in 2023!
Liberal democracy in its true form, however, has a more serious aim of achieving the right political-business nexus that would allow both the politicians and businesses to appropriate gains of trade and investments to themselves. Most supporters of the liberals do not understand this while several others get paid to overlook this element.
They still believe that India is not one nation and can be manipulated to wither away and form different warring states so that businesses, especially the buy-out class can prosper.
Like the socialist state withering away at its extreme, the liberals think that extreme liberalism would help drive the state into anarchy!
They also fear the prospect of India becoming another China, which will make the market difficult to access. China, instead of withering away at the peak of communism or socialism, emerged as a state capitalist structure!
The main reason behind this is the Narendra Modi government’s ‘Make in India’ strategy, which in one way is foreclosing some market segments permanently to foreign businesses.
In olden days, there were stories of foreign powers working undercover to influence Indian state agencies and even its armed forces to revolt and seize power.
In the early 60’s of the last century, stories were floating about state agencies of the United States covertly egging on the Madras Regiment to seize power in the state and form a government.
These liberals are using all their means to force out the duly elected government through all possible means.
Inside Parliament, the opposition parties are forcing both houses to adjourn by non-stop shouting demanding discussion on their various demands, the latest being the alleged spying on opposition party leaders and so-called media persons using the Pegasus spyware.
Outside the House, Congress leader Rahul Gandhi, recently showed his allegiance to Rakesh Tikait, who has been protesting against the government’s pro-farmer legislation.
Tikait, who claims to represent farmers, has deployed his supporters on Delhi’s peripheries, for eight months now, running a ‘Kisan Sansad’ at Jantar Mantar, parallel to the monsoon session of Parliament.
The latest example of the active destabilisation effort is the forced resignation of BS Yediyurappa as Karnataka's chief minister on 26 July. Certainly, there is an external force trying to influence ruling party members to oppose their own governments. What else would explain the forced resignation of a leader who built up the Bahartiya Janata Party in a difficult state like Karnataka.
These forces are counting on the caste considerations to destabilise the government and the ruling party from within the government itself!
They are exploiting the incapability of Yediyurappa to rise above the position of a caste chieftain – a leader of the dominant Lingayat community – and accept a more generous approach to its electoral base.
The fact remains that despite dissidence from within the party, Yediyurappa remains the leader who built BJP’s Karnataka unit from scratch. He also is the only unifying force who can bring together different caste groups that vote for the BJP.
MORE REPORTS