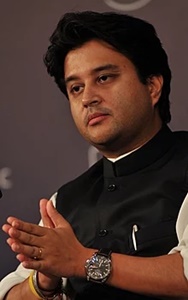 Reports said 20 ministers, including 16 cabinet ministers, have resigned from the government in Madhya Pradesh.
Scindia today met Prime Minister Narendra Modi and home minister Amit Shah, raising the prospects of his joining the Bhartiya Janata Party (BJP).
The Congress leader also made public his resignation letter addressed to Congress president Sonia Gandhi.
The resignation letter, dated 9 March 2020, states "this was a path that has been drawing itself out over the last year."
Besides Scindia, 16 cabinet ministers of the Congress government in Madhya Pradesh resigned on Monday night and requested the chief minister to reconstitute the cabinet. According to the chief minister's office, the ministers, including home minister Bala Bachchan, finance minister Tarun Bhanot and law minister PC Sharma, tendered their resignations to Kamal Nath at a late night cabinet meeting.
Scindia’s coup comes a day after 17 Madhya Pradesh MLAs supporting him went incommunicado. Chief minister Kamal Nath was forced to rush back to Bhopal from Delhi after supporters of Jyotiraditya Scindia, including a minister, reached BJP-ruled Karnataka by a special flight later on Monday.
Reports said these MLAs were shifted to a private resort in Whitefield.
The Congress party, meanwhile, has declared failure in wooing Scindia back to its fold to save itself.  Congress said Scindia has been dismissed from the party.
The party high command is sending emissaries, including Rajasthan deputy chief minister Sachin Pilot to Scindia in order to win him back, but without success.
Chief minister Kamal Nath said it is the handiwork of BJP to destabilise Madhya Pradesh government, even as former Madhya Pradesh chief minister and BJP leader Shivraj Singh Chouhan maintained that his party was not interested in toppling the government and termed the developments as the “internal matter” of the ruling party.
“This is the Congress’ internal mater and I would not like to comment on it. We had said on the first day that we are not interested in bringing down the government," he tweeted.
MORE REPORTS