Maharashtra gets its first Thackeray CM 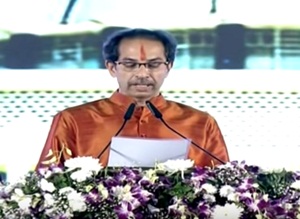 Along with Uddhav, six ministers — Eknath Shinde and Subhash Desai from the Shiv Sena; Jayant Patil and Chhagan Bhujbal from the NCP and Balasaheb Thorat and Nitin Raut from the Congress — took oath.
Governor Bhagat Singh Koshyari administered the oath of office to Thackeray and the six ministers at a grand ceremony in Mumbai’s Shivaji Park, which has been at the centre of Shiv Sena’s politics for over the past five decades.
Sena founder Bal Thackeray's son Uddhav also brought the Shiv Sena under the Maha Vikas Aghadi, the newly manufactured alliance of Shiv Sena, NCP and Congress.
Other ministers will be sworn in once the government proves its majority on the floor of the House.
Congress President Sonia Gandhi skipped the function, but wrote to Uddhav reminding him of the threat from BJP which forced the “extraordinary” coming together of the three parties.
Senior Congress leaders, including Madhya Pradesh chief minister Kamal Nath, Ahmed Patel and Kapil Sibal, attended the ceremony. MK Stalin, TR Baalu, Shankarsinh Vaghela and Uddhav’s estranged cousin Raj Thackeray marked their presence. NCP President Sharad Pawar, the architect of the new alliance, was greeted with applause.
“Congratulations to Uddhav Thackeray Ji on taking oath as the CM of Maharashtra. I am confident he will work diligently for the bright future of Maharashtra,” PM Narendra Modi tweeted.
Former chief minister Devendra Fadnavis was present along with BJP leader Chandrakant Patil
“Shiv Sena executive President Uddhav Thackeray Ji today took oath as Chief Minister. I was present. Congratulations and wish him all the best for the future,” Fadnavis tweeted earlier.
Meanwhile, the Mumbai High Court refused to give urgent fearing to a petition seeking a stay to swearing-in of Uddhav Thackeray as Maharashtra chief minister.
The petition, filed by a group of persons describing themselves as BJP supporters, sought a direction to the BJP and the Shiv Sena to stand by their pre-poll alliance and form government.
The court, however, refused to grant urgent hearing to the petition saying, the concept of divorce is not new to the law of marriages.
MORE REPORTS