A dream of a PDP-NC-Congress alliance to form a government in Jammu and Kashmir that would effectively keep the BJP out of power was nipped in the bud after governor Satyapal Malik dissolved the state assembly. 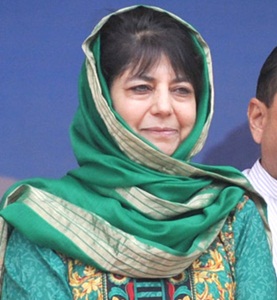 The move that comes as a respite for political watchers after a day of political speculation about the banding together of divergent groups that are friendly to terror groups and their supporters, however, is likely to be challenged by these parties in the Supreme Court.
The dissolution of the 87-member assembly comes after five months of governor’s rule in the state, ahead of the six-month deadline.
The new alliance is a combination of terror-friendly parties, says BJP Jammu and Kashmir unit, adding that polls id the best way out of rival ideologies forming new allies.
Mehbooba Mufti, on the other hand, said BJP is spending money to buy loyalty.
The dramatic developments that unfolded on social media and WhatsApp began with news of the PDP, the Congress and the NC being in a huddle to form the government in the state.
As former Chief Minister Mehbooba Mufti took to Twitter to state that her fax to the Raj Bhawan in Jammu was “strangely not received” and Governor Satya Pal Malik remained unavailable on his phone, People’s Conference chairman Sajad Lone claimed the blue tick on WhatsApp to indicate his letter staking claim at government formation had been acknowledged.
The day’s developments forced all political stakeholders, including the state’s lone CPI(M) legislator M Y Tarigami, who reportedly met National Conference (NC) vice-president Omar Abdullah, to take sides in the tug of war between former allies PDP and BJP.
Altaf Bukhari, a senior PDP leader and former finance minister under the PDP-BJP coalition government and Jammu and Kashmir’s richest legislator, was expected to be the new chief minister under the new disposition.
The PDP had 28 MLAs in the dissolved assembly, followed by NC with 15 and Congress with 12, which would have give them a clear majority with 44 members in the 87-member assembly.
The parties decided to gang together allegedly for foiling BJP’s efforts to poach legislators from Mehbooba Mufti’s party and prop up a government headed by Sajjad Lone's People Conference, reports quoting sources said.
If the coalition talks help form a new front opposed to BJP, it would trigger far-reaching realignment of political forces in Jammu and Kashmir, bringing back  the days of Congress-PDP government of 2002-2007, perhaps with participation by the National Conference as well.
Reports quoting National Conference sources said the party is not interested in joining a coalition government but would not be averse to giving outside support to a PDP-Congress coalition.
MORE REPORTS