Altaf Bukhari, a senior PDP leader and former finance minister under the PDP-BJP coalition government and Jammu and Kashmir’s richest legislator, is likely to be the next chief minister of the state if the talks between the three parties — National Conference, People’s Democratic Party and Congress — strike the right cord. 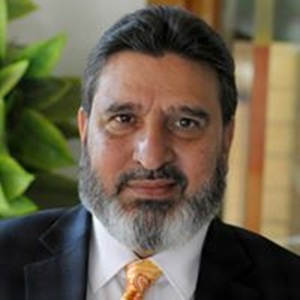 The PDP has 28 MLAs, followed by NC with 15 and Congress with 12, which will give them a clear majority with 44 members in the 87-member assembly, reports said, adding that talks are at an advanced stage, according to reports.
The move is aimed at foiling BJP’s efforts to poach legislators from Mehbooba Mufti’s party and prop up a government headed by Sajjad Lone's People Conference, reports quoting sources said.
If the coalition talks help form a new front opposed to BJP, it would trigger far-reaching realignment of political forces in Jammu and Kashmir, bringing back  the days of Congress-PDP government of 2002-2007, perhaps with participation by the National Conference as well.
Reports quoting National Conference sources said the party is not interested in joining a coalition government but would not be averse to giving outside support to a PDP-Congress coalition.
J&K is currently under governor's rule, which cannot be extended after it completes its six-months on 19 December. If no government is formed by then, it would be President’s rule thereafter.
However, Mehbooba Mufti, the popular PDP leader, who headed the PDP-BJP alliance government is unlikely to be chief minister again after Mufti fell when its partner BJP pulled out of the ruling coalition on 16 June.
Bukhari, a businessman-turned-politician, who was finance minister under the PDP-BJP coalition, cold be the choice then.
Bukhari was the state’s education minister and was later assigned the additional charge of finance, labour and employment departments after the then finance minister, Hasseb Drabu, was dropped from the council of ministers.
Earlier, Bukhari held the portfolio of R&B minister during the tenure of Late Mufti Mohammad Sayeed.
Bukhari, who represents the Amira Kadal constituency in Srinagar, was the richest candidate in 2014 Assembly elections in Jammu and Kashmir with assets worth Rs 84 crore.
MORE REPORTS