Congress may back Mamata or Mayawati for PM to unseat Modi

The Congress, which has projected party president Rahul Gandhi as its prime ministerial candidate for the 2019 Lok Sabha polls, on Tuesday indicated it is not averse to accepting a nominee from any other opposition party for the top post, only to see Narendra Modi and his party BJP defeated. 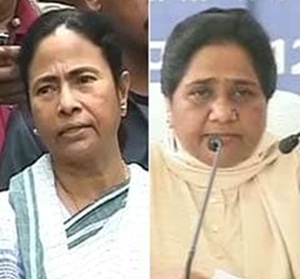 Mamata Banerjee (left) with Maya wati
Reports quoting top Congress sources said the party has given indication that it is willing and ready to sacrifice for an alliance with any party at the centre and states to prevent the BJP from coming back to power in 2019.
While the Congress has stated that it's going to be an "ideological fight", the party needs to bring all the opposition parties together to defeat the BJP.
Also, there is speculation that projecting a woman prime ministerial candidate may help win the next elections and names of BSP leader Mayawati and TMC supremo Mamata Banerjee are doing the rounds.
The Congress Working Committee  (CWC), which met on Sunday decided to project Rahul Gandhi as its prime ministerial face for the 2019 Lok Sabha polls. It also authorised Rahul Gandhi to forge alliances with "like-minded" political parties to take on the ruling BJP.
Congress spokesmen also said while party president Rahul Gandhi will be its prime minister candidate for the general elections the party is not averse to his stepping aside for a woman candidate from a possible opposition alliance. Rahul Gandhi, sources said, "is comfortable seeing any prime minister other than an RSS-backed one"… "Let's see how the dice rolls," the sources added.
"India in 2004 was different from 2014. This is beyond our regular political battle. It is for the first time all institutions are attacked," the sources said and added," the more the RSS attacks Congress, it will help the party to build."
The calculation is that the BJP will not get enough seats to win the next general polls as parties like the TDP and the Shiv Sena are not happy with its functioning.
For Narendra Modi to be the prime minister again, he has to get seats in the range of 280 and that is not going to happen, they add.
The Congress is now looking at the grand anti-BJP alliances in Uttar Pradesh and Bihar to work out, which then will make it difficult for Modi to retain power.
While Uttar Pradesh has 80 Lok Sabha seats, Bihar has 40 and the two together comprise over 22 per cent of the total strength of Lok Sabha members of 543.
MORE REPORTS