After two days of intense drama, B S Yeddyurappa of the Bharatiya Janata Party today took oath as the chief minister of Karnataka after the BJP was invited to form the government in the state by Karnataka governor Vajubhai Vala, who administered the oath of office to him. 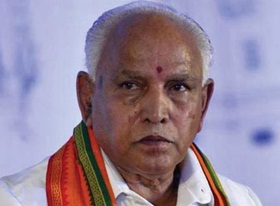 This came after the Supreme Court late on Wednesday night refused to stay the swearing-in of ‘BSY’, a two-time chief minister. The swearing-in predictably led to more drama, with Congress leaders and MLAs staging a sit-in at the Vidhan Sabha.
Meanwhile, two Congress MLAs went “missing” – likely ahead of the horse-trading inevitable in Indian politics when there is a hung assembly.
Telangana chief minister K Chandrashekar Rao and Andhra Pradesh chief minister Chandrababu Naidu have reached out to Janata Dal (Secular) supremo HD Deve Gowda and offered shelter to Congress and JD(S) MLAs in Vishakhapatnam or Vijayawada to shield them from BJP overtures.
The BJP leader has been given 15 days by the governor to prove his majority.
In a rare post-midnight hearing, the Supreme Court ruled out that it won't stop Yeddyurappa swearing-in. "As far as swearing-in is concerned, we are not restraining it, but we are making it subject to the outcome of the case," a three-judge bench comprising Justices A K Sikri, S A Bobde and Ashok Bhushan said after a three-and-a-half-hour hearing.
Senior lawyer Ram Jethmalani has approached the Supreme Court against the Karnataka governor’s invitation to B S Yeddyurappa to form the government in the state.
Speaking about the events, Jethmalani said, “What has the BJP said to governor, that he did such a stupid action? The order of the governor is open invitation to corruption.”
The Supreme Court will resume hearing the case on Friday at 10.30 am and has ordered the BJP to produce the letters of support submitted by B S Yeddyurappa to the governor by then.
Earlier, Yeddyurappa had said, "I will fly to Delhi on the 15th once the results are announced and meet Prime Minister (Narendra) Modi. I will invite him and others for the swearing in ceremony which is going to happen most likely on the 17th."
Jethmalani had on Thursday mentioned before an apex court bench of Chief Justice Dipak Misra and Justices A M Khanwilkar and Justice D Y Chandrachud his application for urgent hearing against governor Vala for inviting Yeddyurappa to form the government. The bench directed him to mention it on Friday before an appropriate bench.
One of the first decisions that Yeddyurappa took before even forming his cabinet was to waive farm loans for 1 lakh farmers. Addressing the media, Yeddyurappa said, “The moment I became the chief minister, I have decided to waive farm loans for 1 lakh farmers. And this is also for cooperative farm loans.
“I met with chief secretary Ratan Prabha and important points will be looked at. It will be finalised today or tomorrow morning. This is a promise I made to the farmer community and I am delivering on that promise now.”
Yeddyurappa also hit out at the Congress and the JD (S), saying they were trying to "immorally" form alliance in Karnataka. Yeddyurappa also suggested that some of the Congress and JD (S) MLAs would support him, saying, "A lot of Congress and JDS [MLAs] want a BJP government. They should vote during [the] trust motion [based on their] conscience."
To shore up its numbers, the BJP will likely look for support from Lingayat MLAs in rival camps who could be unhappy at the Congress-JD(S) alliance that sought to make H D Kumaraswamy, a Vokkaliga, the chief minister.
There are about a dozen Lingayat MLAs in the Congress and JD(S) who could rally around to backing Yeddyurappa, considered the most important politician from the community. The community supported BJP, largely rejecting Congress's move to offer religious minority status to Lingayats.
The BJP is arguing that the mandate was against Congress, while JD(S) was a distant third. Party leaders have made it clear that falling just eight seats short would not prevent it from forming a government after BJP registered a gain of 60-plus seats.
MORE REPORTS