The results for the Karnataka Assembly elections held on Sarturday, today went in favour of the Bharatiya Janata Party (BJP) . 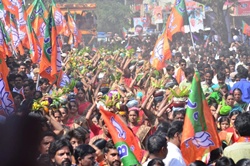 The BJP's lead at 11:30 am was at 113 seats with a vote share of 34 per cent, while the Congress with a 36.7 per cent vote share was 67 seats, while JDS  raised its tally from 30 to 40 and others 2.
According per norms, postal ballots were counted first.
A record 72.36 per cent of the 50.7 million (5.07 crore) electorate cast their votes, with 27,908 electors in defence services exercising their franchise through postal ballots, Business Standard reported.
The Election Commission had deployed 16,662 personnel for counting of votes amid tight security.
The Karnataka election had been billed as the biggest political battle of 2018, with a potential bearing on the 2019 general elections.
The BJP's bid to reclaim Karnataka had faced its toughest challenger from chief minister Siddaramaiah, who had appeared at being able to beat anyi-incumbency.
Four of the seven polling agencies had predicted in their exit polls that the BJP would emerge as the single-largest party, while most exit polls had predicted a hung assembly with the BJP ahead, while two said the BJP would either come very close to or cross the halfway mark of 112 seats.
The India Today-Axis exit poll had said the Congress could bag a majority. All exit polls gave the H D Deve Gowda-led Janata Dal (Secular) nearly two dozen seats or more, which making it the kingmaker in the event of a hung Assembly.
MORE REPORTS