A petition by two Congress MPs challenging Rajya Sabha chairman M Venkaiah Naidu’s decision to reject the impeachment notice against Chief Justice of India Dipak Misra was “dismissed as withdrawn” by the Supreme Court on Tuesday. 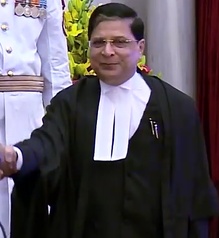 In a 45-minute hearing, a five-judge constitution bench headed by Justice A K Sikri declared the petition dismissed as withdrawn after senior advocate and Congress leader Kapil Sibal, representing the Congress MPs, decided to withdraw the plea, even as he raised objections to the setting up of the five-judge Constitution Bench.
Sibal, counsel for Congress MPs Partap Singh Bajwa and Amee Harshadyay Yajnik, said he was withdrawing the petition after the constitution bench refused to give the petitioner details of the administrative order passed in constituting the bench.
Responding to Sibal’s questions, Attorney General K K Venugopal said only two MPs of the Congress had approached the apex court. He submitted that the six other parties that had given a notice for impeachment did not move the top court.
"The presumption is that all others have not supported the stand taken by the Congress to challenge the rejection of impeachment notice by Naidu," the AG said.
Sibal, widely seen as the driving force behind the notice, had sought a copy of the order allotting the case to the five-judge bench and argued that the CJI did not have power to allocate the matter to a constitution bench by an administrative order. He also said it was beyond the authority of the registrar concerned to list the matter directly before the five-judge bench. However, Venugopal, appearing for Naidu, said the CJI had the power to do so.
Speaking at a press conference after the hearing, Sibal said the Congress party wanted to protect the independence of the judiciary. “We want to protect the dignity of the court. At the same time, we want to ensure that the processes of the court are not polluted. This is not a political issue.
"We filed petition in the Supreme Court yesterday and was to be heard today. But we were informed last evening that our petition would be heard by five judges. Who gave these orders and what were the orders?” asked Sibal.
The constitution bench constituted to hear the CJI impeachment petition didn’t include the four senior-most judges of the apex court who had in January publicly aired their grievances over how CJI Misra was running the court and allocating cases. The five-judge bench, led by Justice A K Sikri, comprised Justices S A Bobde, N V Ramana, Arun Mishra and AK Goel.
The court asked Sibal to argue on merits of the petition, but the Congress leader was adamant that he would first see the order and decide if it should be challenged or not. As the bench also stood its ground, Sibal said he was withdrawing the plea.
On Monday, a two-judge bench comprising Justices Chelameswar and S Kaul had asked the two Congress MPs to return today with their petition challenging Naidu’s rejection of an opposition motion seeking the removal of the CJI. The petition contended that once a removal motion signed by MPs was submitted to the Rajya Sabha chairman, he had no option but to constitute an inquiry committee to look into the charges. However, the Justice Chelameswar referred to a constitution Bench decision that said only the CJI had the authority to list cases before appropriate benches.
On 24 April, vice president M Venkaiah Naidu rejected the impeachment notice signed by 71 opposition MPs of the Upper House, seven of whom retired last month, against CJI Dipak Misra, citing the absence of any “proved misbehaviour” or “incapacity” on the part of the senior judge. He ruled in a 10-page order that the grounds were insufficient to admit the petition.
Following the rejection of the impeachment motion, Sibal had termed Naidu’s order as “unprecedented, illegal, ill-advised and hasty” and asserted that the party would challenge it in the Supreme Court.
Meanwhile, the Bar Association of India, an organisation of lawyers, stated that the notice for the impeachment of Chief Justice of India Dipak Misra was "unwarranted" and “an assault on the judiciary".
MORE REPORTS