Vice president and Rajya Sabha Speaker Venkaiah Naidu today rejected opposition-sponsored notice to impeach Chief Justice of India (CJI) Dipak Misra on the grounds of impropriety in his functioning as head of the judiciary. 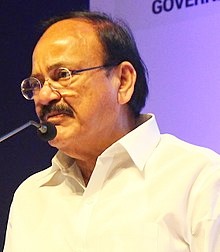 Naidu rejected the Congress-led opposition notice after extensive consultations with top legal and constitutional experts on the maintainability of the motion, sources said.

Leaders of opposition parties met Naidu on Friday and handed over the notice of impeachment against the CJI bearing signatures of 64 MPs and seven former members, who recently retired, opening a new front against the Narendra Modi government (See: Seven parties, 64 RS MPs launch move to impeach Chief Justice Misra).

Naidu had on Sunday held discussions with a number of constitutional and legal experts, including Attorney General K K Venugopal, and former top law officer K Parasaran on the maintainability of the opposition notice.

The Congress, meanwhile, asked CJI Dipak Misra to consider recusing himself from performing judicial and administrative work till he was cleared of allegations of misconduct.

The Congress also attacked the BJP for coming out in "defence" of the CJI and said the ruling party was compromising the position and office of the chief justice as the neutral arbitrator and head of the judiciary.

The party was doing great a disservice to the independence of the judicial system, it said.

"The CJI must come out and tell the BJP not to politicise his office," Congress leader Randeep Surjewala told reporters here.

He further said the CJI did not belong to any political party and questioned why he had to be defended by members and ministers of the ruling BJP.