Ratings agency Fitch on Monday cut India's GDP growth forecast for the current fiscal to 6.7 per cent from its earlier projection of 6.9 per cent, saying although the economy had rebounded, growth was weaker than expected. 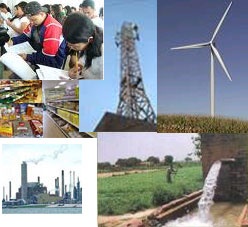 The agency also cut growth forecast for the next fiscal, FY19, to 7.3 per cent from 7.4 per cent it had predicted earlier.

Fitch is, however, hopeful of a pick-up in India's growth rate in the next two years on the back of the government's gradual implementation of its structural reform agenda and higher real disposable income.

It noted that growth has 'repeatedly disappointed' in recent times due to disruptions in the economy, but that the economy bounced back from a three-year low to expand by 6.3 per cent in the July-September quarter with manufacturing picking up and businesses adjusting to the new indirect tax regime.

Fitch, however, said it expects the GDP growth to pick up in the next two years.

''Recent moves by the government should help support the growth outlook and enhance business confidence,'' it said.

Fitch is of the opinion that the two-year bank recapitalisation plan, worth Rs2.1 lakh crore, will help address the capital shortages that have hindered the banks' lending capacity. Also helping the economy will be the Rs6.9 lakh crore road construction plan.

Stating that it expects GDP growth to pick up in the next two years, Fitch said gradual implementation of the structural reform agenda is expected to contribute to higher growth, as will higher real disposable income.

"Recent moves by the government should help support the growth outlook and enhance business confidence," it said.

On global growth, the ratings agency said pick-up has been better than expected. It forecast 3.2 per cent expansion this year and 3.3 per cent next year.

The International Monetary Fund (IMF) has said it will update its growth rate for India in February.