Uproar as Taj Mahal blanked out from UP tourism booklet

A war of words broke out on Monday over the absence of Taj Mahal from an Uttar Pradesh government booklet about ongoing and future tourism projects. 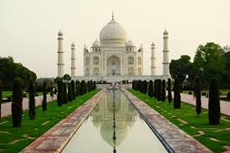 Titled Apaar Sambhavnaye (Boundless Possibilities), the brochure released by the Uttar Pradesh Tourism Department displays most of the other cultural and heritage sites in the state, more particularly those associated with the Hindu religious tourism. But the Taj Mahal - one of the Seven Wonders of the World, attracting lakhs of tourists each year - it has been omited in it.

The brochure has raised eyebrows, especially as it comes a few months after chief minister Yogi Adityanath said the Taj Mahal did not represent Indian culture, as the Ramayana and the Bhagavad Gita did.

The brochure has a picture of the Ganga Aarti in Varanasi on its cover featuring Adityanath and state tourism minister Rita Bahuguna Joshi. Its inside pages cover most of the cultural and religious sites related to Hinduism, but the Mughals have been blanked out.

After an opposition fusillade describing the Yogi government as "communal", the state tourism ministry issued a press release detailing a slew of projects it had initiated for the Taj Mahal and surrounding areas.

State Tourism Minister Rita Bahuguna Joshi said UP was ''committed'' to developing the ''world-famous'' Taj Mahal and tourist spots related to it.

''The development of Taj Mahal and Agra is among the priorities of the Central and state governments,'' she said.

Agra was being developed as a Smart City, she said, adding that efforts were on to start a Metro Rail there.

A UP information department release said, "The government, with the help of the World Bank, has proposed projects worth Rs370 crore, of which projects worth Rs156 crore are meant for development of the Taj Mahal and Taj Mahal region.

"Proposals for these projects have been prepared in consultation with the World Bank under the pro-poor tourism scheme. These have been sent to the Centre and are expected to be cleared in the next three months," it added.

Since the booklet was released three months after Adityanath said at a rally in Darbhanga in Bihar that "foreign dignitaries visiting the country used to be gifted replicas of Taj Mahal, which did not reflect Indian culture", the opposition began pouring criticism on the Yogi government.

Communist Party of India (Marxist) MP Brinda Karat said, "I believe that for people all over the world, one of the major spots for tourists is the Taj Mahal. It also supports the economy of UP. This is truly made in India. Therefore, people will only laugh at him (Adityanath) and his complete ignorance of history and importance of preserving the beauty of the Taj Mahal."