The remerged All India Anna Dravida Munnetra Kazahagam (AIADMK) has finally managed to rid itself of the burden of VK Sasikala aka Sasikala Natarajan and her nephew TTV Dinakaran and decided to name the deceased leader J Jayalalithaa as the eternal general secretary of the party. 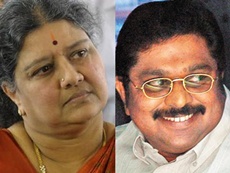 The decision to expel the general secretary and her deputy was taken at a meeting of the AIADMK general council today.

Tamil Nadu minister RB Udayakumar announced the decision while reading out the party's resolutions taken at the general council meeting.

The decisions, however, are subject to approval from the Madras High Court.

The Madras High Court had on Monday allowed the party to go ahead with the general council meeting putting aside objections by the estranged general secretary Sasikala and her nephew and deputy TTV Dinakaran and a few of their supporters seeking to put the meeting on hold.

At least 18 lawmakers loyal to Sasikala skipped the meeting.

Reports quoting sources said the meeting, attended by 2,000 members, officially declared the merger of the factions led by E Palaniswami and O Panneerselvam, although after much deliberations. The meeting further ratified the appointment of deputy chief minister OPS as the chief of the 11-member steering committee of the party.

Sasikala's expulsion had been one of the key demands by OPS, who had a tiff with her after she forced him to give up the chief minister's post earlier this year.

Sasikala had taken over the reins of the AIADMK after Amma's death in December last year.

Meanwhile, Sasikala's nephew Dinakaran seems to have teamed up with the DMK and is demanding a trust vote in the assembly. He reportedly has the support of 19 AIADMK lawmakers.

DMK leader MK Stalin had on Sunday met the governor claiming support of 119 legislators, including Dinakaran and his men, which is two more than the required number in the 234-member house.

Meanwhile , the reunited AIADMK has claimed the majority with 124 members on its side, including the nine MLAs who have switched over from Dinakaran's side.

Dinakaran has said the chief minister should resign, and also threatened that he would "not hesitate to bring down the EPS government."

A lawmaker from his camp on Monday filed a petition with the Madras High Court asking the AIADMK general council meet to be put on standby.

The court dismissed this petition saying any decision by the AIADMK general council would be subject to its approval. The next hearing has been scheduled for 23 October.