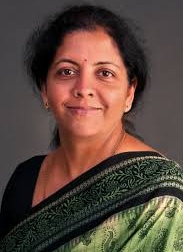 Mrs Gandhi held the defence portfolio twice - In 1975 after Swaran Singh before elevating Haryana strongman Bansi Lal; and again on returning to power from 1980 to 1982.

In what is seen as performance and target-based reshuffle-cum-expansion, Modi also promoted Piyush Goel as railway minister with cabinet rank and shifted railway minister Suresh Prabhu who had opted to quit in the backdrop of a series of major train accidents, to the commerce and industry vacated by Sitaraman's elevation to defence.

Modi also made Dharmendra Pradhan minister of petroleum and natural gas with additional charge of the skill development and entrepreneurship portfolio, till then headed by Rajiv Pratap Rudy and elevated Mukhtar Abbas Naqvi to a full cabinet rank.

Sitharaman, who steadily rose from the ranks to become BJP's spokesperson and junior minister and now the minister of defence, a rare honour for a woman, said she felt very humbled and that she could not describe her recognition in words.

"The party and the Prime Minister have been very supportive. As an ordinary worker from the south, it's a recognition by the party which overwhelms me," she said.

Nitin Gadkari, another high performer, who held the road transport, highways and shipping portfolio, was awarded additional charge of water resources, river development and Ganga rejuvenation portfolio that was taken away from Uma Bharti, who was shifted to drinking water and sanitation.

Uma Bharti, widely seen as a non-performer, however, was retained in the ministry, although, earlier, there was speculation that she could be dropped.

President Ram Nath Kovind administered the oath of office and secrecy to the new ministers at a brief ceremony at the Rashtrapati Bhavan, attended among others by new vice president M Venkaiah Naidu, Prime Minister Modi, BJP President Amit Shah, Leader of the Opposition in the Rajya Sabha Ghulam Nabi Azad and family members of some of the new ministers.

In the third reshuffle of the ministry in three years, Nitin Gadkari, who held Road Transport and Highways and Shipping, also got the Water Resources, River Development and Ganga Rejuvenation Ministry that was taken away from Uma Bharti, who moved to Drinking Water and Sanitation. Earlier, there was speculation that Uma Bharti could be dropped.

Modi also inducted four bureaucrats into the government, three of them ministers of state and one with cabinet rank

Former home secretary R K Singh, a Lok Sabha member from Bihar, got power and new and renewable energy portfolios held by Goyal, while former diplomat Hardeep Puri was given charge of housing and urban affairs which was earlier held by Venkiah Naidu.

"Demolition Man" K J Alphons has been made MoS with independent charge of tourism and electronics and IT ministries.

Puri and Alphons will have to get elected to Parliament in six months.

Shukla, a Rajya Sabha member from Uttar Pradesh, has served as cabinet minister in the state for eight years and is known for his work in rural development, education and prison reforms.