The warring AIADMK factions in Tamil Nadu are likely to plan a merger as they look for ways to avert certain defeat in the next round of elections, amidst a chorus of protests from within and outside the party factions over the open abuse of democracy by the ruling party. 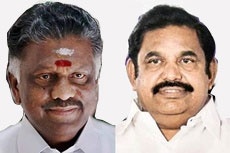 The stage now also looks set for a shift in Tamil Nadu politics with faces of superstars like Rajinikanth and Kamal Haasan popping up at events organised by political opposition in the state, amidst rumours that Rajnikant will emerge as the face of BJP in Tamil Nadu and Kamal Hasan's vexation with the ruling AIADMK factions.

The chances of a merger improved with the ruling AIADMK (Amma) faction today declaring the elevation of VK Sasikala's nephew TTV Dinakaran as the deputy chief of the party as "invalid", signalling a revolt within the ruling faction led by Tamil Nadu chief minister EK Palanisamy.

The announcement, made at a meeting chaired by Palanisamy, paved the way for the split of the AIADMK (Amma) faction, in part cleared the way for a merger of the Palaniswamy-led faction joining hands with erstwhile chief minister O Panneerselvam.

Sasikala, the general secretary of the Amma faction, had been the de facto No 2 in the AIADMK for over three decades thanks to her close association with Jayalalithaa as her live-in aide.

Although she is now in jail in connection with an assets case, she virtually controls the party with most of the AIADMK MLAs flocking behind her. That also explains the sudden elevation of her nephew TTA Dinakaran as the deputy general secretary of the AIADMK (Amma).

The invalidation of Dinakaran's elevation is being seen as a signal to the AIADMK (Puratchi Thalaivi Amma) faction led by deposed chief minister O Panneerselvam for a merger.

Kamal Haasan, 62, spoke at a ceremony held to mark 75 years of DMK's party organ, Murasoli. The actor was also critical of the ruling party, the AIADMK, asking people to email ministers with complaints of what he described as widespread corruption.

Then, at the launch of TV show Bigg Boss, which he is anchoring, the actor said, ''There's corruption everywhere.'' Ministers responded by describing him as ''a third-rate actor'' and threatening tax audits and legal cases.

Rajinikanth in June made political hearts beat faster by announcing that he is contemplating a new day job. He asked fans to be ready to fight the good war and said he is in talks with different parties. In 1996 Rajinikanth had asked the people to support the DMK government and not its charismatic opponent J Jayalalithaa, famously declaring, ''Even God can't save Tamil Nadu if Jayalalithaa comes back to power again'' a move which he later described as ''a mistake and an accident.''

Meanwhile, reports said a number of DMK and AIADMK leaders and workers are expected to join BJP this month-end when party president Amit Shah visits the state. Among former ministers likely to join the party is Nainar Nagendran, a former AIADMK industries minister from Thirunelveli who belongs to the politically powerful Thevar community.

Shah will arrive on a three-day visit to Tamil Nadu on 22 August and will attend party meetings in Chennai and Coimbatore.

Top BJP leaders said an overhaul of the state party machinery was in the works as Shah wants BJP to become more visible in the state. More agitations, just as the one held by the party's yuva morcha recently, to ask for holding local polls and better quality of teachers in government schools are being planned.